9 replies to this topic

Amongst the 200 pens I grabbed at the Los Angeles Pen Show in Feb 2011, were- oh- five or ten i plan to keep in my own collection, at least for now. I have a range of mini-collections, and of late I've been assembling a modest set of the Moore streamlined "A" line pens, as in L-96A, L-94A etc. These fly somewhat under the collecting radar, but are pens of decent quality by a respected manufacturer, and they can be found in some lovely plastics. While Moore late in the game had drifted a bit from its very high quality origins, it did still make nice pens. Good trim, nibs of appropriate size, and sound plastic can be found. I've made a small push into this series, having seen nice specimens at pen shows, and maybe inspired by Terry Brack's appreciation for them. I have no intention of collecting these in a completist fashion. There are multiple sizes and colors to be found. Part of the charm is that I still encounter from time to time colors I've not seen before.

At the Los Angeles show I found an oversized specimen ( L-96A model) in a new-to-me color, a green with pinstripes.

Popping color, to say the least.

Green marble with pinstripes of black, gold, and a gray/red mix. 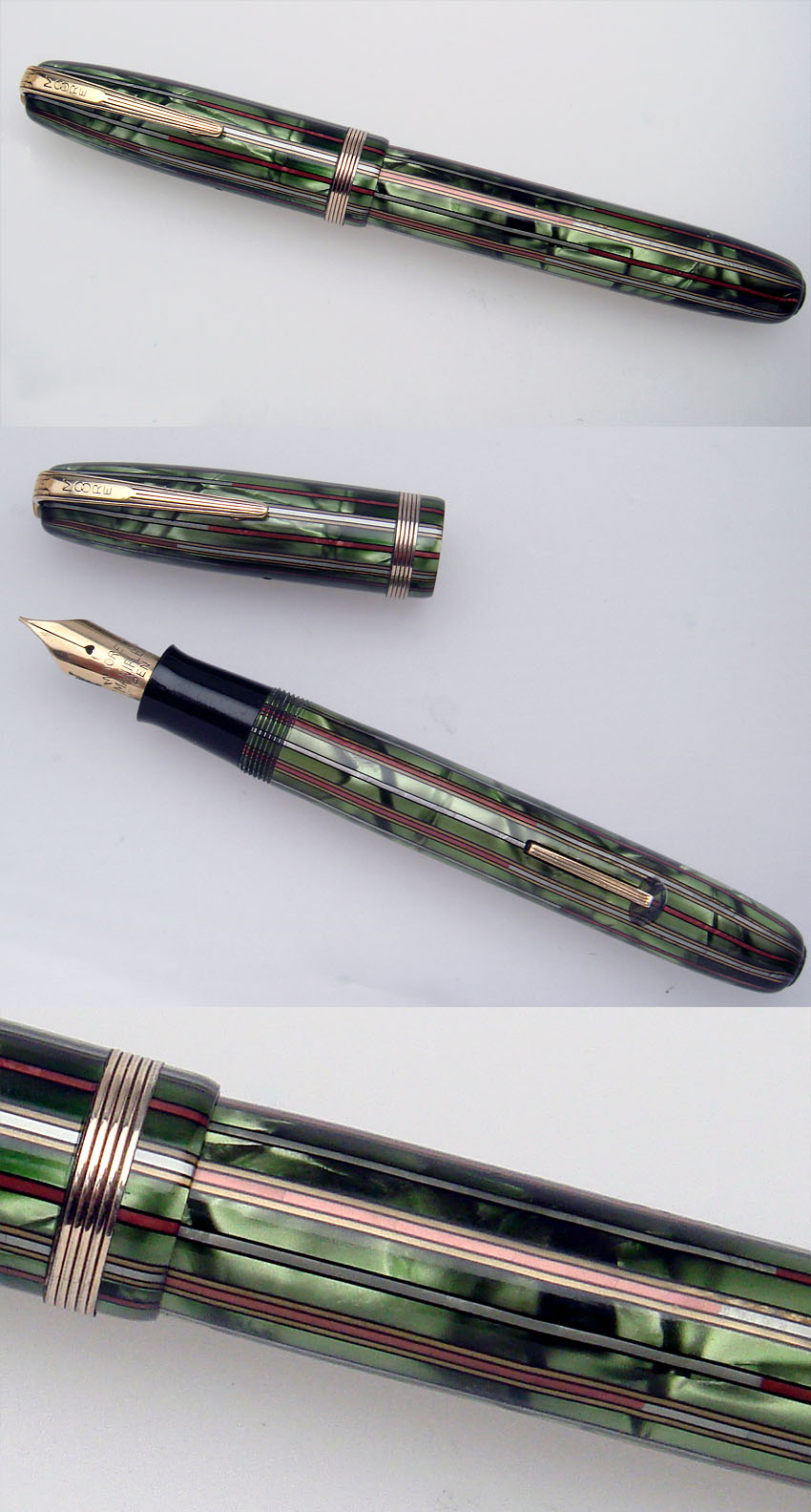 For context, here are a few more of my Moores. Only the top "candy stripe" is the large 96-A, the others are standard 94-A. Note the more prevalent striped pattern and the less common "snakeskin" (can be found in both green and gray I believe) 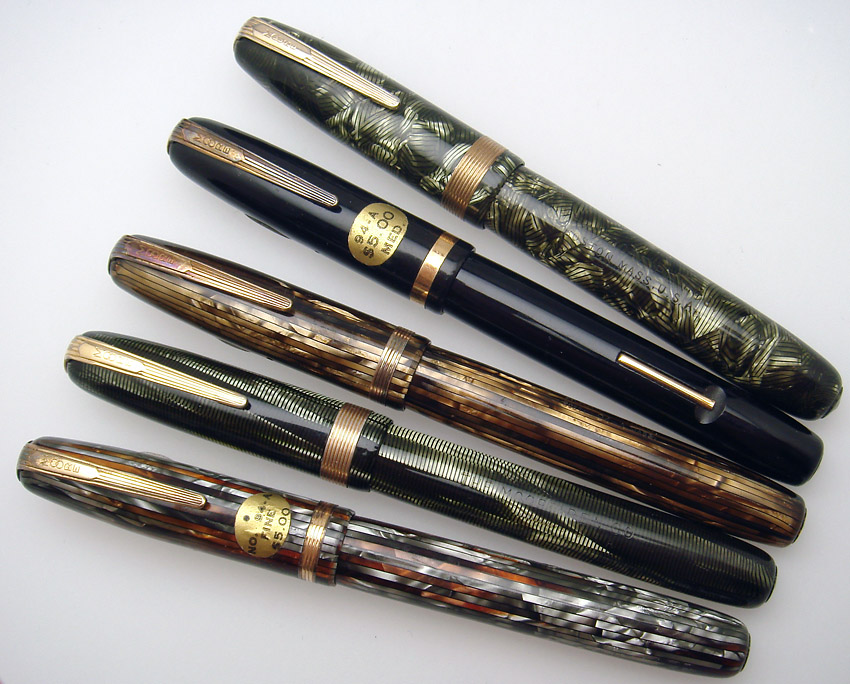 And, an older shot of my snakeskin pattern Moores. Since shooting this bunch, I've found a short slender (ringtop? Cannot recall) and a gray snakeskin 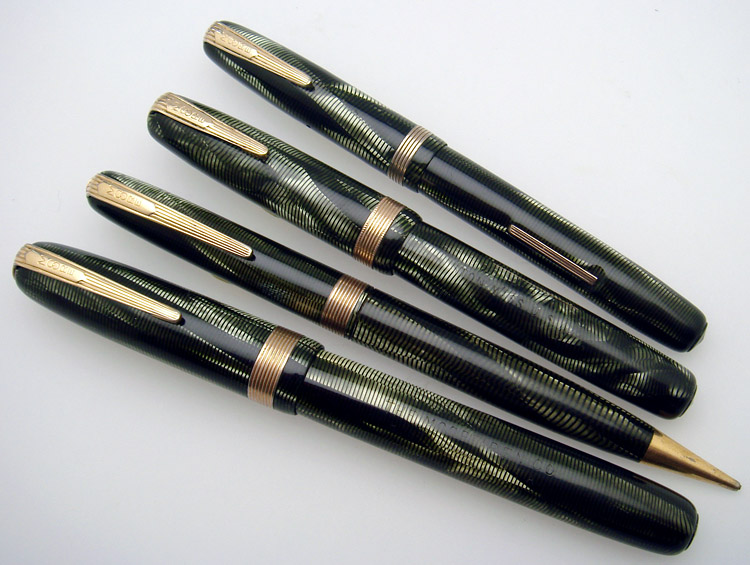 A thread arose on the esteemed Zoss List regarding pinstripe A-line Moore pens (as in model 96-A etc). A fellow posted his blue-based and brown-based pinstripe pens. Someone mentioned red.

This whole pinstripe A-line Moore thing has been gnawing at me, ever since just a few months ago I bought up my first A-line pen to have that pattern- in this case the 96A oversize shown in the initial link I'd posted.

Yeah, I've already mentioned how I don't actively hunt the A-line Moore pens, but that when one shows up I don't already own, I'll tend to toss it in the personal pile, now at a dozen or more pens. But those stripes... I kept seeing those stripes.

Having seen the few pens shown on Zoss List today and having chatted about them at length, mirabile dictu, I recalled I have... seen... these... before.

It was long ago, in the my first few years in the hobby, when I still was toting my camera lab to many pen shows and shooting pretty well everything I could get my hands on. The pens were worn, they were Moore, and they were pretty. I montaged them back in 2005 and probably posted the image. Only now in retrospect do i put them into context.

I suspect the two on left are standard 94-A. The pens on right perhaps a 72-A and 92-A. I'd "found" my "first" green five months ago. But it wasn't the first of these. Jim Knight just showed blue and brown, the "first" i'd seen in these colors. But... not so.

None of the following are mine. Blast from the past, and who says shooting all the old pens one can has no benefits... 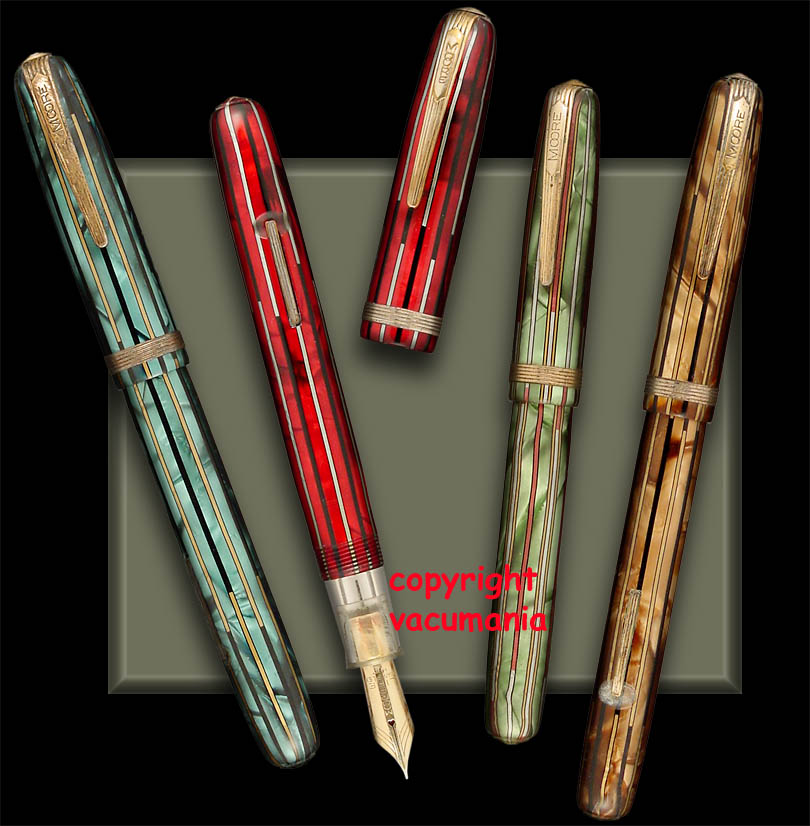 Those are unreal. reminiscent of the universal that you posted in the other thread. Truly an underrated pen series, one can find nice flexible nibs, for a reasonably cheap price.

Ok, I actually collect these also as a subset of my overall Moore Collection. Got some nice ones, will have to shoot them together sometime for now here's an old shot of my 96-A, a red one. ( David, you may recognize the pen in the background! 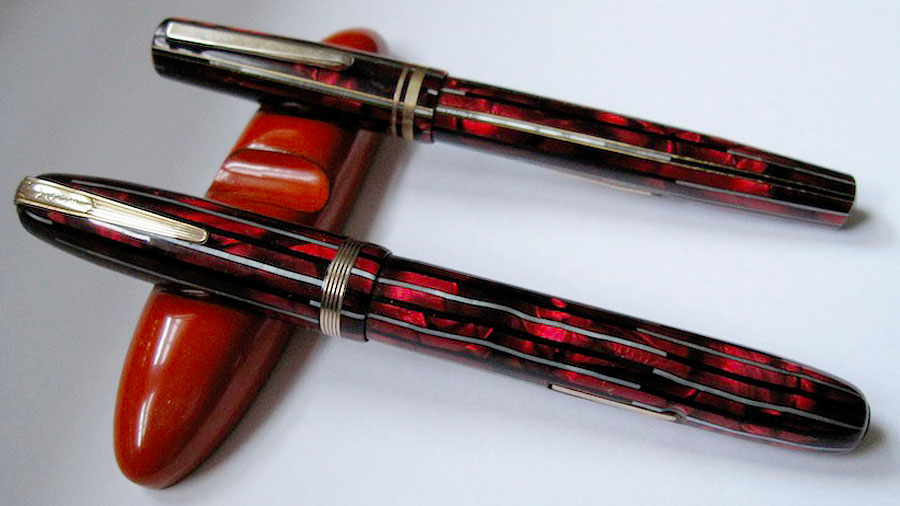 Happy David. I just grabbed my second oversized (96-A) in candy-mesh plastic, this one in gray, to go with the green I found a few years ago. 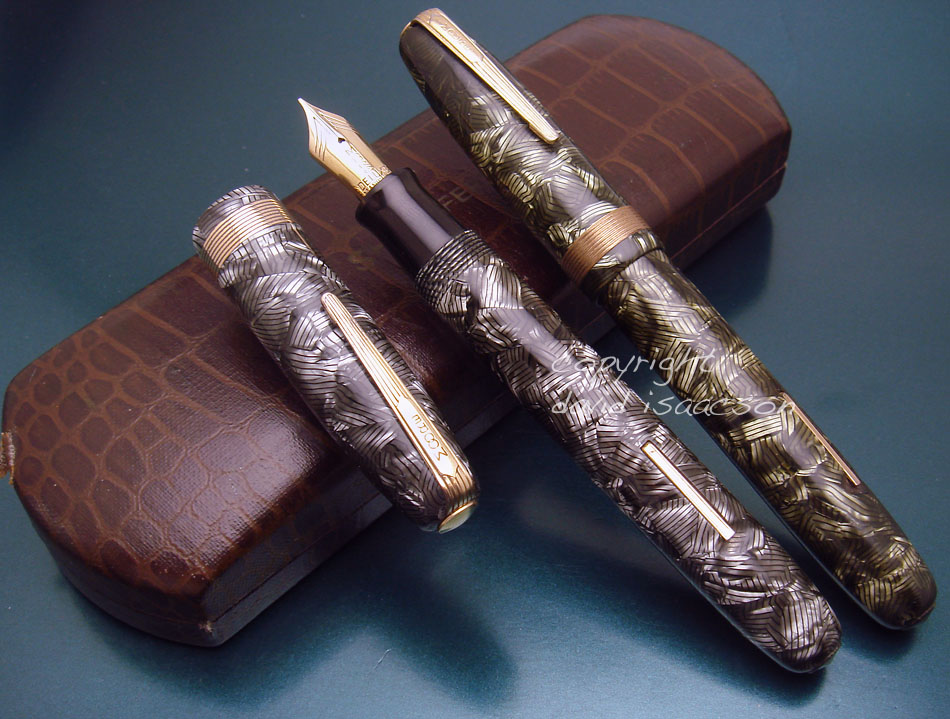 I note that a Moore Fingertip in striated celluloid (I usually see them in solid finishes) ended at $228.00. Not a bad day at the office for the seller.

That's actually not expensive for that  Fingertip. Fingertips pull well more than open-nib pens, and most Fingertips are solid-tone (presumably injection) plastic, with the Celluloid pens carrying marked premium.

Aha. I somewhat figured it wasn't exorbitant, being a more desired / less-common body. It also seems that many of them are in pretty rough shape, which wasn't the case here. Still a damned ugly design, but that never stops anyone!

Here's a brown snakeskin ..... not sure the model number because it wasn't marked, but it was junior sized. It didn't last long :-)

I have three Moore's.  The two red ones were actually stickered when I got them but the big one had badly corroded metal parts and the smaller one started crumbling at the top of the cap a few years ago.