9 replies to this topic

link to the gallery. Not sure how this all works, but I think it is the only way I can upload the pictures

Here are you photos so you don't have to click through: 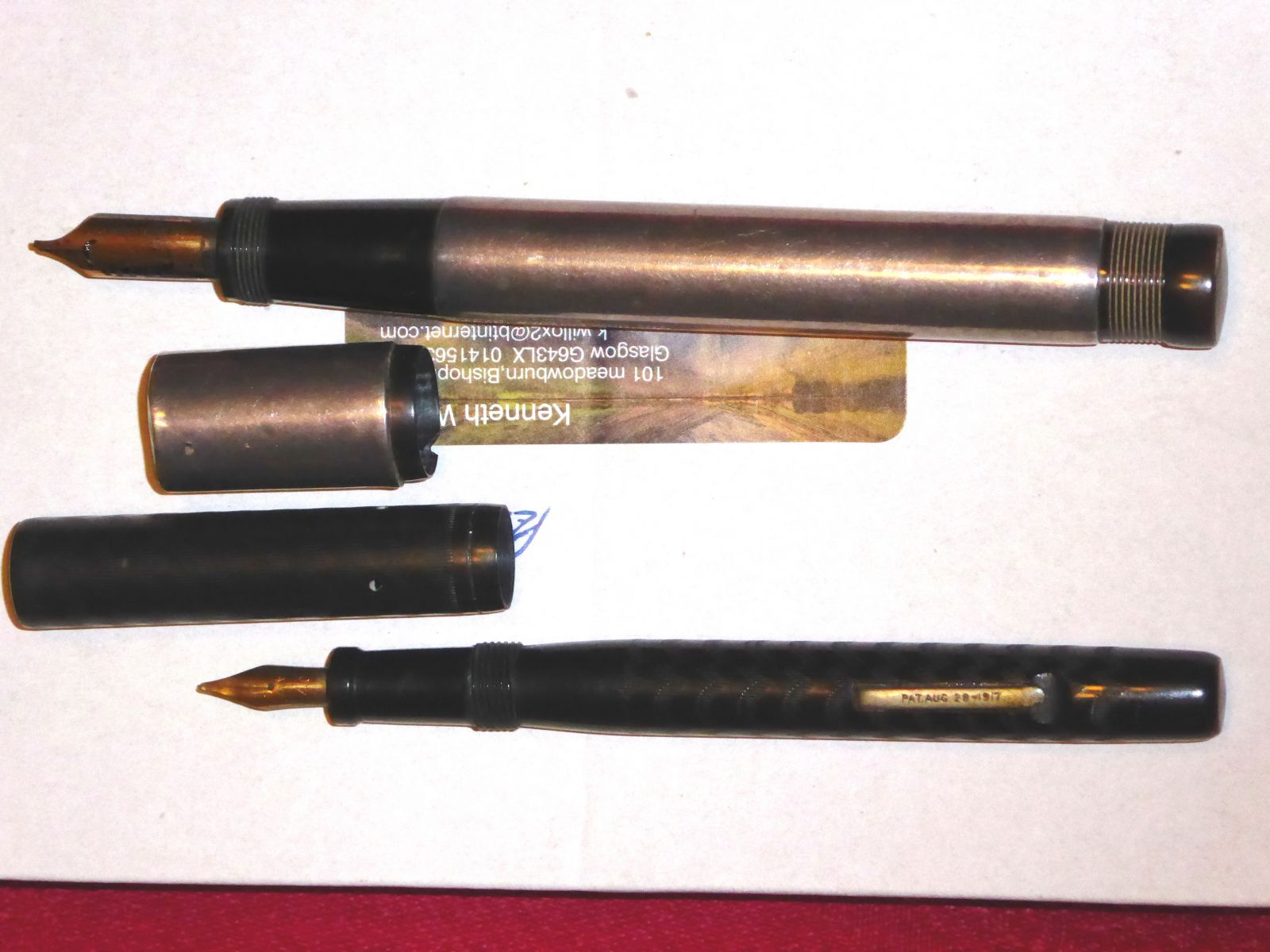 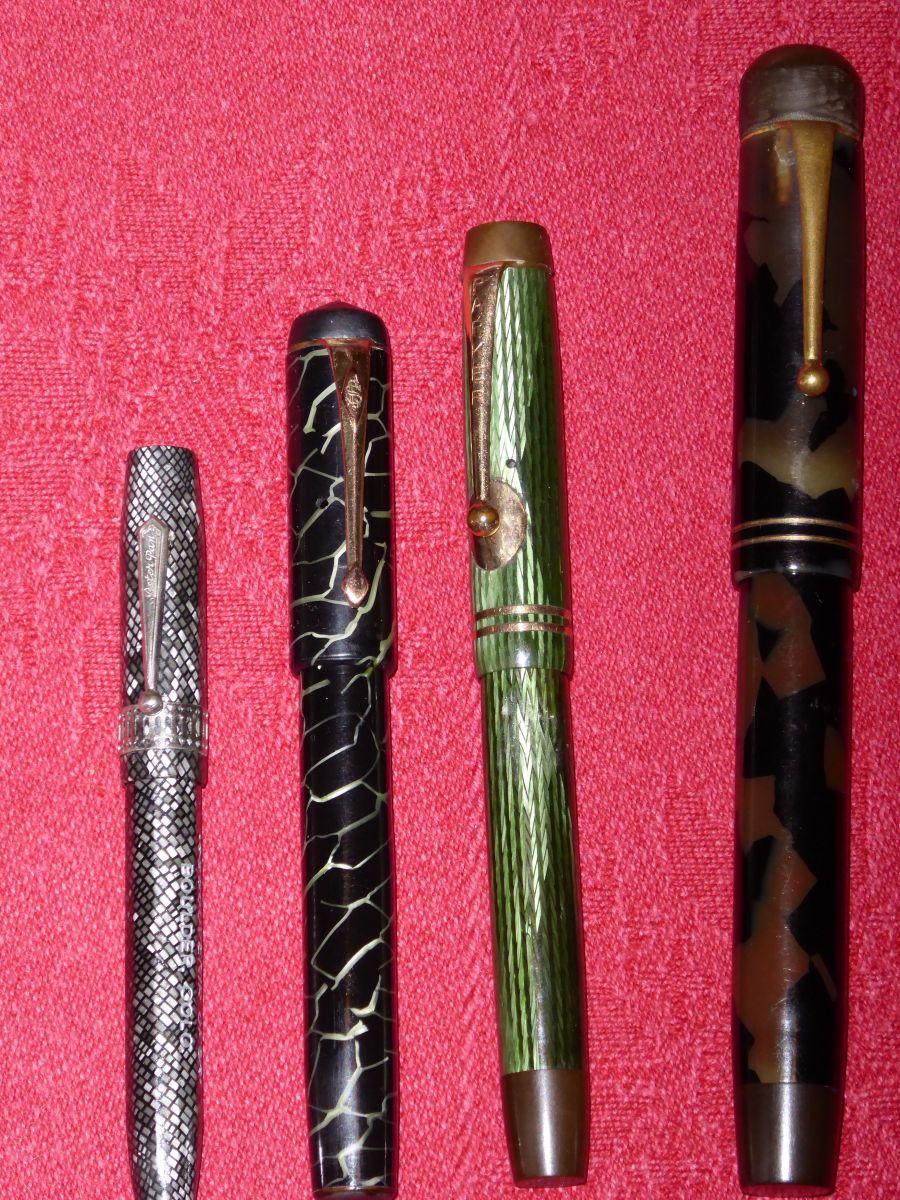 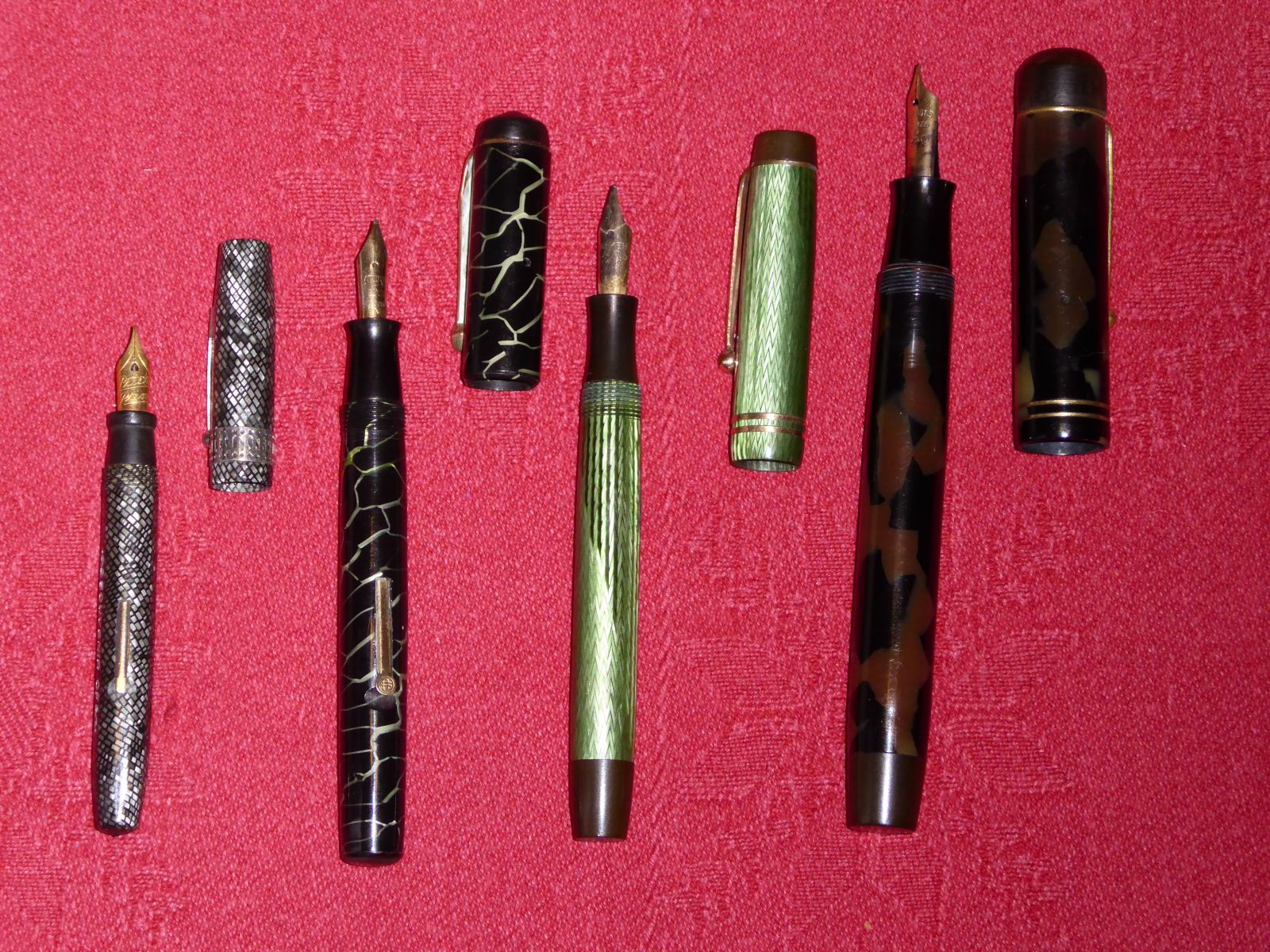 The top pen is a large safety. As can be seen it has been well used and has the wear and chips to match. There are no markings but the hallmark dates to 1925 and it has a J Whytwarth nib that has been detipped and reground at an angle.

Underneath is what I believe to be an American Conway Stewart. It is stamped The 'Botolph' lever by JAS Wisely & Co. When the first war began (in 1914) Conway's who didn't have a manufacturing base realised that there would be severe shortages and proceeded to order large numbers of pens from the USA. The American pens were not marked, so are difficult to identify but this one has the patent date Aug 28 1917 (American date notation) on the filler lever which can be traced back to the Eclipse Pen Company. Conway's built up their business supplying third party marked pens, usually to stationers such as the WHS Pen to WH Smith's. There was a Wisely stationers in St Martin's Lane in the 1860's so possibly they had links in the City by the turn of the centenary. I would date the pen to between 1917 and 1923.

On the other two pictures is a lizardskin Peter Pan. I know nothing of these pens but a friend calls me Peter Pan and I collect lizardskins, so here it is! Next is a cracked ice Conway Stewart Dinkie. I don't know which model. Either it wasn't stamped or (more likely) it was polished out.

The last two are probably made by Valentines in the 1930's.  The first is a Parker Duofold in green moire. It is unusual in that it has an oval plate under the clip ball end. The other is a large 140 mm Harrods pen. Very Duofold in style, but most English pens were. It may have a replacement nib, feed and cap top as they don't feel right for the pen.

Sorry to disappoint you re your cracked ice CS, I can be certain there were never any Dinkies in that material, though I have seen several clever attempts at fakery. The closest Dinkie equivalent is a casein lookalike for the celluloid cracked ice - the casein version is easy to spot because you find it with red, blue or green inclusions in the material (and very handsome it looks too). It was common practice in the 30s for casein manufacturers to make cheaper close imitations of the celluloid materials.

Apart from all that, the shape and size looks all wrong for a 30s Dinkie - my best guess would be it is a 'cut & shut' reduced version of a larger pen, hence the polished out number.

I won't lose too much sleep over it at the price Andy. It looks the part, although the seller, macdoodel, did say the cap had been cut back.

Very nice.  I generally don't let myself look too long at British pens from this era for fear of developing more bad pen habits.

Well Rick, two of the pens were made in America and Parkers at Janesville also produced an identical Duofold while the Harrods pen is basically a Duofold Senior, so you already have most of the bad habit!

On inspection my Conway cracked ice pen has a screw in section. I've never come across one of those on a Conway lever filler before. Does any one know what models they were used on?

The only genuine CS I know of with a screw section are some atypical gold-filled overlays, probably US made, late 1940s, with a very short lever. I think this probably supports my earlier conjecture that your example is a cut and shut version from a larger pen. which I think is trying to be a Duro 2, mid to late 1930s, but all aspects of the shape just look wrong. It is so wrong, I think it is unlikely it was made to deceive, more likely just a genuine attempt at recycling bits and pieces. However, there have been many attempts to fake cracked ice pens since they became popular. The gentleman with the best (and I think probably complete) collection of CS cracked ice once showed me an interesting cracked ice fake with the white bits convincingly painted on. I believe the very best UK-based cosmetic restorer (Bernard Hawkins) once produced something similar based on a black 1930s Dinkie - just to prove that it could be done!

The long shot is that it could be something made for Le Tigre, or even a prototype, but I don't think either possibility is terribly likely, I'm afraid.

I'm sure someone put a lot of thought into remaking, probably a broken Conway, cracked ice pen back into use. The filler lever is larger than on a 286 and has the earlier round medallion, rather than the diamond medallion on it.

My current surmise is that the barrel was broken at the section and it was reformed to accept a screw in Parker section into the now wider barrel. The section is the same shape as a Victory AF I have, as is the pattern on the underside of the feed, but smaller and I can't get the CS nib to seat properly.