3 replies to this topic

So maybe it's not a real "sumgai" find (would've been if I'd gotten these for like $20), but while the Western world was sleeping, I picked these up on eBay yesterday for $80 total--two matching sets of Vacumatic pens and pencils in the desirable blue pearl. Note that they sport the less-common "stacked-coin" cap bands, and that, intriguingly, one pen seems longer than the other--a single-jewel long Major?

I'm semi-retired from collecting and these are the first Vacs I've acquired in more than a couple of years but I look forward to receiving and fixing them up (one pen's tines are bent, the other's section may need replacement; thankfully I have parts).

Check out my pens here and my blog here.

Did one pen turn out to be longer or was it just the camera angle?

but they were in good shape, and I was able to fix the bent nib pretty easily, so I just need to resac them and replace one of the sections.

Speaking of semi-sumgais, my wife and I are visiting San Diego to see our daughter (always a good excuse for Comic-Con

) and we took the trolley out to visit the antiques shops in La Mesa, as we usually do, and the other day I felt very lucky to score three pens I couldn't resist at the prices they went for: 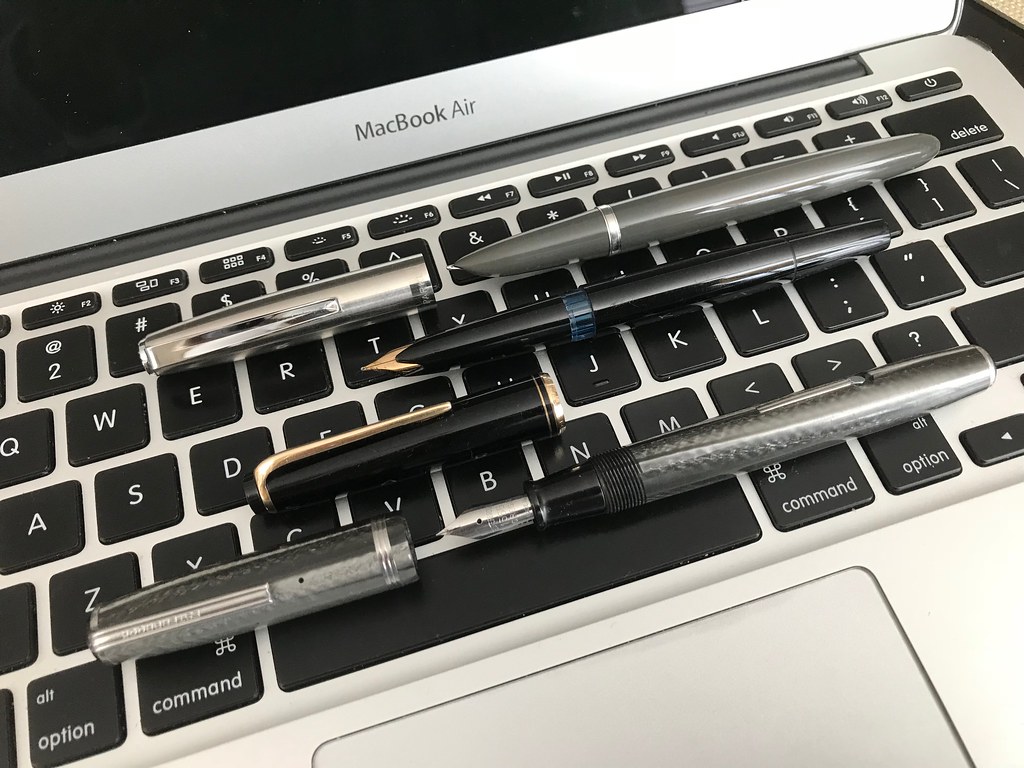 The three pens were a Montblanc 22 from the 1960s, a Parker 21, and an Esterbrook SJ, and they went for $48, $20, and $20, respectively. They were in like-new condition, except for the SJ which had a bent nib which I should be able to replace easily. The MB had a tag saying that the seller wasn't sure if it was working, but a simple check of the piston showed that it was. I inked it up at home and it had a springy F nib. The 21 was a smooth M/B.

I thought of reselling them but my wife immediately laid claim to the MB, which I was happy to oblige, and I'll probably just keep the the others for show and tell

Check out my pens here and my blog here.

Wait!  Semi-retired from collecting!  It can't be.

Also tagged with one or more of these keywords: sumgai, parker, vacumatic, ebay

0 user(s) are reading this topic