15 replies to this topic

My dear friend Alan Charlton has completed his magnum opus on the most underrated of British pens - the Burnham. He delves deeply in to the background, models etc and provides many wonderful pics (some of my collection too).
Here is the URL - http://www.pengrauncher.co.uk/

Thanks for the link which I'm sure will become a great resource. I know Steve Hull & Barry Rose extremely well but have never (as far as I know, at least) had the pleasure of meeting Alan Charlton. It is good to find a collector that is genuinely interested in the history of his / her pens, too many people seem to be only interested in acquiring as many pens as possible, with no regard to where they came from!

I haven't yet downloaded everything but I've looked at the section on ringtops, in which I have a particular interest. The evolution of the 'Tiny Dot' brand through the 1920s from Cecil Bristow's Standard Pen company to Burnham is a particular area I've been looking at, a quick scan of a recently acquired Burnham late1920s Tiny Dot box is attached. I'm also interested in how Burnham (and other companies) got away with making such precise copies of the CS Dinkie for so many years and, to this end, I have a number of nice Burnham Dinkie-sized ringtops in my collection. CS first started challenging these companies around 1929 and from this point on, you can see the small ringtops from Burnham, Rosemary and other companies evolve little details to distinguish them from the CS design. I do disagree with Alan about his dating of the ringtops though - CS and Burnham were close competitors in this market through the second half of the 1920s up to WW2, and it is safe to assume the basic changes in style occurred around the same time for each company. We can date the changes in style of the CS Dinkie generally to within a year or two in this period (because of the large amount of advertising material available) and thus get a decent idea of the dates of the Burnham equivalents.

Excellent site. Thanks for the link. Let's pin this for a bit. Do share some images of pens, if you don't mind.

Interesting stuff Akiva , I've had a bit of look at the 65 and 60 sections. I once had a BHR 60, can't remember much about it ( it was sold after some rather harsh comments from the "better half" about having a bunch of boring black pens!!....mint stickered to boot...some actions are difficult to explain in hindsight..) but think it looked like the 2 in the article. A big pen iirc.

Thank you very much for this. What a great resource to have....

I've been meaning to but I'm only just getting to grips with the gallery and the image sizes required therein to make everything look reasonable on the page!

From my 'Interesting casein' album (within my main British Vintage pens album) gallery offering, all these are Burnham equivalents to the Conway Stewart Dinkie of the various eras, lengths of the pens would all be around 3.5 ins, capped. Dates range from late 20s to late 30s. I have a few more but these are the most interesting because the casein materials used for these are relatively unusual and were not (generally) used by Conway Stewart, who were the 'kings of casein' around this time. 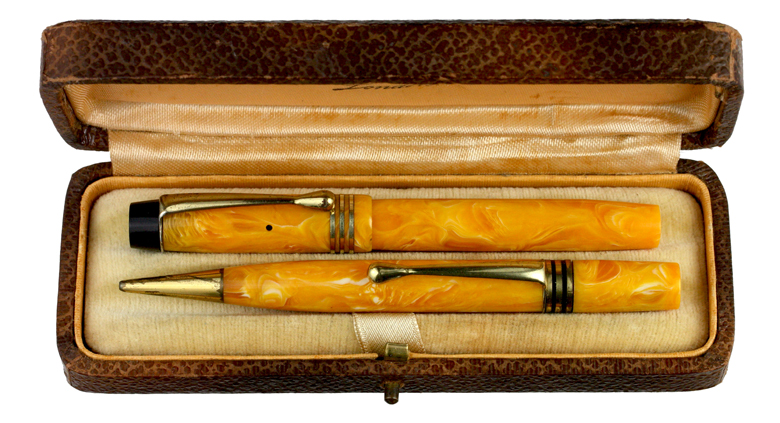 Well Andy, stunning!! , Seeing some of the early examples certainly gives me a much deeper appreciation of Burnham's product.

Some of my early dinky pens

Some more mini burnhams and the princess (5")

Some more mini burnhams and the princess (5")

The box in the middle is superb, I get as much pleasure from the fancy boxes in my collection as I do from the contents! Do any of the Burnham fancy boxes have an oval 'Made in France' impression on the underside?

Hi Andy,
None of my many boxes have an imprint on the underside. Could you show a pic of a such a box please?

Hi Andy,
None of my many boxes have an imprint on the underside. Could you show a pic of a such a box please?

I was just wondering whether Burnham got their boxes and fancy papers made by the same companies as Conway Stewart. A significant number of Dinkie set boxes (especially from the late 1920s) have the imprint underneath, one French company being a prime candidate. Sorry, I used to have a picture of the impressed mark somewhere but I can't lay my hands on the file at present.

Given that none of your boxes have the imprint and, from the relatively few Burnham examples I have seen, the box styles of Burnham & CS look quite distinct, so I suspect they were sourced from different companies.

here is the burnham with the "Harrods" clip.

It seems Alan Charlton's Burnham website is now being hosted by the WES at http://burnham.weson...hamography.html, not at the original link given.

Thanks for the "burnhamography", excellent work and really helpful.

Back to BRITISH PENS