7 replies to this topic

Pen shows are great events. You find things you never expect to see, you have opportunity to fellowship with other collectors, You even get to ask questions, such as " What does BPCLEIANECSTKOY stand for? " or "Why did my breakfast cost $72 at the hotel restaurant?" or "How long into the wee morning hours should you look at pens, before your family reports you a missing person to the local police?"

I love going to pen shows, I like the opportunity to meet new people, I like to share time with old friends, I like being able to go out and share dinner with friends that share my interests. I like spending time in the pit, Being shown how to cut my first "good" cigar (Thanks John!!!) If you never go to one, I hope the following might give you reason to consider attending.

I spoke with a certain long time collector and one of the founders of the Chicago pen show, most recently at the Washington DC pen show. In an issue of Pen World in the early 1990's he spoke then of hopes and dreams of finding a Chilton wingflow with his initials, and even as of this past Saturday, the search is still on. I found it fascinating that as many years in, he was still hopeful and optimistic of finding an example.

I am hesitant to use the word unique, but I definitely think the following pen falls into the category. I was doing some foot time on the floor on Friday, and came across the most significant example of a Chilton wingflow to ever be discovered in the world of pencollectordom.

Wingflows were offered in numerous inlay patterns, and several base colors, as well as a series of secondary "carryover" colors. Most often seen in black, and occassionally in burgundy, any other color is onsidered uncommon, or rare, with flavors that include cherry red, and midnight blue. The highly sought after colors include carnelian, gray pearl, marine pearl, black and pearl, and peacock.

Chilton offered on any pen of $5 or more, to inlay 3 initials for the user at no extra charge. This was often the case, people took full advantage of this promotion, and you find many examples of pens with the original owners initials inlaid in gold fill, into the barrel of a pen.

The fun part of collecting fountain pens, is hoping that someday you might encounter a pen with your initials or name on it. Recently, I was able to come fairly close, in acquiring an early gold filled Sheaffer with the initials "C W K" on the barrel. (mine are CRK... anyone got one? )

Close, but no cigar. I liked the pen thoroughly, to keep it. I like writing with the pen, and the nib, a Sheaffer self filling 3, is a terrific specimen.


Funny, that as a third, you would think that my chances are a bit greater, maybe if I found said pen, I could pass it on to my son. After all, he's the fourth, I am sure he would appreciate the effort and time it took me to find a pen. If you were at the DC pen show, you might have spied Charlie, playing games on either my Iphone, or his Ipod, depending on whether he wore the battery dead or not.

In 1936, the Diamond Crystal salt company celebrated it's 50th anniversary. (The company was founded in 1886 by John and Louis Alberger, Charles Moore and Horace Williams. The group came up with a method of producing salt crystals with more facets, and this somehow made the salt more user friendly.) While this is all well and good, the company decided to offer their employees a special gift to commemorate the occassion. Each employee was given a new Chilton wingflow in burgundy, with a special plaque on the back of the cap, noting the company's diamond anniversary. 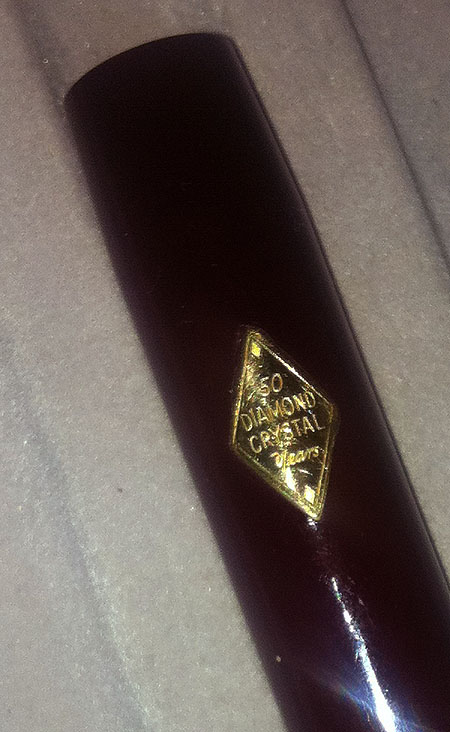 Along with this, each employee received a pen adorned with their initials. These pens often turn up, it is a best guess to figure Diamond Crystal employed a considerable workforce in 1936.

Here, I offer the most spectacular specimen ever found of a Diamond Crystal salt company 50th anniversary pen., It is in the proper burgundy, with an employees initials inlayed into the barrel. Unfortunately not mine, but I cannot think of a better example to own, or have in my collection of Chilton pens. It surely is unique, priceless, and the rarity of this pen, it seems impossible to put a pricetag on an item like this.

I am eager to ask the company if they have any records from the time period, perhaps an old employee roster, to lead me to figure out who this person was, What their name was, or maybe some additional information on who they were. I am sure they invited trouble every time they initialed something.

Great story, Rick! Lovin' the find! I hope you do follow up on investigating the employee with those initials. I look forward to the addendum to this story.

Ah! Funny write up, and great pen! That is one of the "best" pens I have ever seen!

Rick (CRK, Charles 3rd),
Great contribution to pendom. Great story and appreciate you filling in the otherwise obscure history. Discovering the real A.S.S might prove less provocative than what we do with our imaginations. Nevertheless, a pivotal discovery for sure.

I agree with what you said about pen shows, puffing cigars and sipping benedictine, cognac, hooch, aged port, bourbon, or moonshine in the pit. It doesn't get much better.

i vote that you get credit for the CWK Sheaffer, one letter off or not; though, not if it discourages continuation of THE SEARCH.

It was great to see you and everyone else who stole time to chat this week end.

Sounds like you had a wonderful time! Someday, I'll be back...

Good Morning Rick,
After our phone chat yesterday afternoon, I couldn't image what your great Wingflow find was all about. I applaud the fact that you wouldn't let the cat out of the bag, even though I threw enough questions at you. You even managed to change subjects when I started to talk about initials on the Wingflow's, and we talked English history for a while. Anyway, what did I find when I opened your post this morning? An "ASS" in my face. That's the best Wingflow I think I've ever seen. I sure don't blame you for saying it's a keeper. Another reason to attend the pen shows if you can. Congrats old friend. I'll go through my Wingflows very carefully to see if a CRK shows up, but I'm pretty sure I would caught it. BTW: Just in case anyone out in the land of Pendom finds an inlaid "WSB", just give me a holler. Cheers, Bill B

I was doing some foot time on the floor on Friday, and came across the most significant example of a Chilton wingflow to ever be discovered in the world of pencollectordom.

Here, I offer the most spectacular specimen ever found of a Diamond Crystal salt company 50th anniversary pen.

The pen clearly belonged to someone in management. Possibly even an executive. At the very least they had to be somebody's boss... Dontcha think?

And lest I forget; pray tell what does BPCLEIANECSTKOY stand for?

The only sense that's common is nonsense...

I was inspired by the good doctor, I think I spent too much time with him over 4 days.... Lol

As far as what it stands for, I cannot say, you will have to go to a pen show and ask Erano.