12 replies to this topic

For those new to the theme, Combos (fountain pen and pencil in one) were a late 1920's-early 1930's fad, and far more are found from third tier makers and thus of low quality, than are found quality and/or big name examples.

Aikin Lambert by the late 1920's is believed to have been owned by LE Waterman. Pens turn up with features suggesting a Waterman connection, and while generally the pens are of good quality, often they are found with disproportionately small nibs indicative of 2nd tier status within the Waterman hierarchy. Some have quite lovely colors.

I've never seen an Aikin combo prior to stumbling across the pen featured in this post, a pen that turned up in the "1000 pen hoard" i picked up last summer. That collection featured some nice pens, one overwhelmingly great pen, mostly weak pens, and a number of interesting-- though not high value-- pens.

This one is of good quality, with fairly clean chrome trim and with sharp imprint.

Unfortunately, while one might expect a link between ambassadors and The Capitol, the Ambassador cap on this pen appears to make this combo a frankenpen., as Ambassador is not known to have had an Aikin connection. The color match could be worse. Whether an Aikin cap in this plastic can be found indeed is a great uncertainty.

But, the pen is interesting just for being an Aikin combo. I don't examine every combo I spot at pen shows, and no doubt my focus on Aikin is not as strong as on some other pens, but that this is the first Aikin combo I've... noticed... makes it interesting to me.

Anyone have anything to offer about Aikin combos? 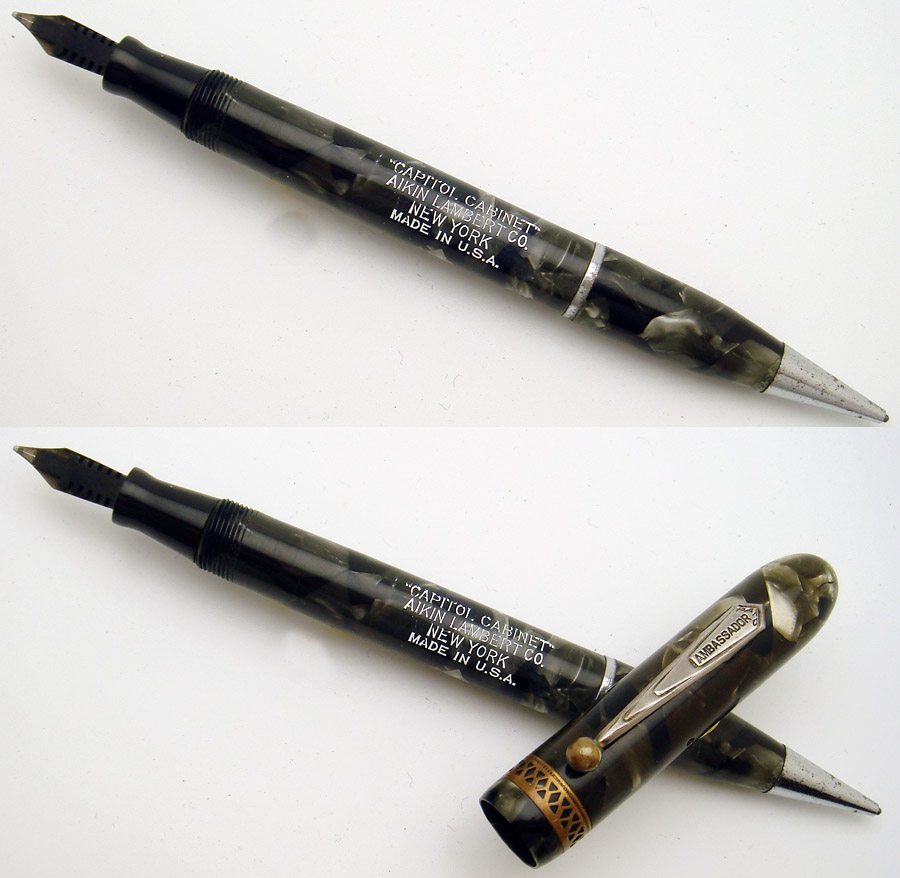 I've seen a few, but ALC combos are definitely rare items. Not a lot of documentation on any of the later ALC products, which leaves us with even less background material than usual. Note that testimony in the Sheaffer patent suit indicates that Aikin Lambert was already a de facto subsidiary of Waterman by 1915.

Confusingly, it seems that Aikin Lambert split at some point previous, so it was the part dealing with writing instruments that went to Waterman, whereas the Aikin Lambert that dealt with jewelry stayed independent.

Quite an amazing pen! I remember the first combo I found, a Parker Combo, and I had no idea how valuable it was when I found it in an Antique shop in Pasadena.

It's been about 18 months since I posted this thread about an Aikin Lambert Combo, unfortunately lacking the proper cap, a pen found in the (mostly verrrry low end) "Thousand Pen Hoard" I'd acquired summer 2010. So, we're pushing three years out from the purchase.

As often is the case when I find a pen of interest, I tried to learn a bit more about this pen. I already knew that by the time this Combo was issued (`~1930) that Aikin had been bought by Waterman and effectively represented a 2nd-tier sub-brand of that famous company. Indeed, some Aikins look very much like leftover Waterman pens. Aikins tend to have small nibs during this era, reflective of 2nd-tier status.

I learned and now believe (perhaps I even am correct) that the plastic AIkin Combos were done often (always?) in plastic also seen in typical pens. I peeked at a complete Combo in a different plastic and realized it had the same clip as conventional pens of this sort. This suggested to me that conventional pens and Combos shared the same cap style.

Aikins of this sort are a niche collectable. The pens tend to be affordable (save for particularly interesting or scarce larger pens). I wondered if I could find a cap for my Combo by finding a user grade (or better, if found at right price) conventional pocket pen. I admit I never hunted with great intensity.

But on ebay couple weeks back I spotted an Aikin Lambert pen that appeared to be same style and color as my Combo barrel. Indeed, it has quite similar barrel makings. Even identical pen variants don't always allow good parts swaps (fit can vary for more than one reason), but I was willing to take a chance. I won the pen at quite reasonable price. Indeed, the Aikin nib is about worth the price of entry.

It arrived. Here is that pen, the potential cap donor to my Combo. 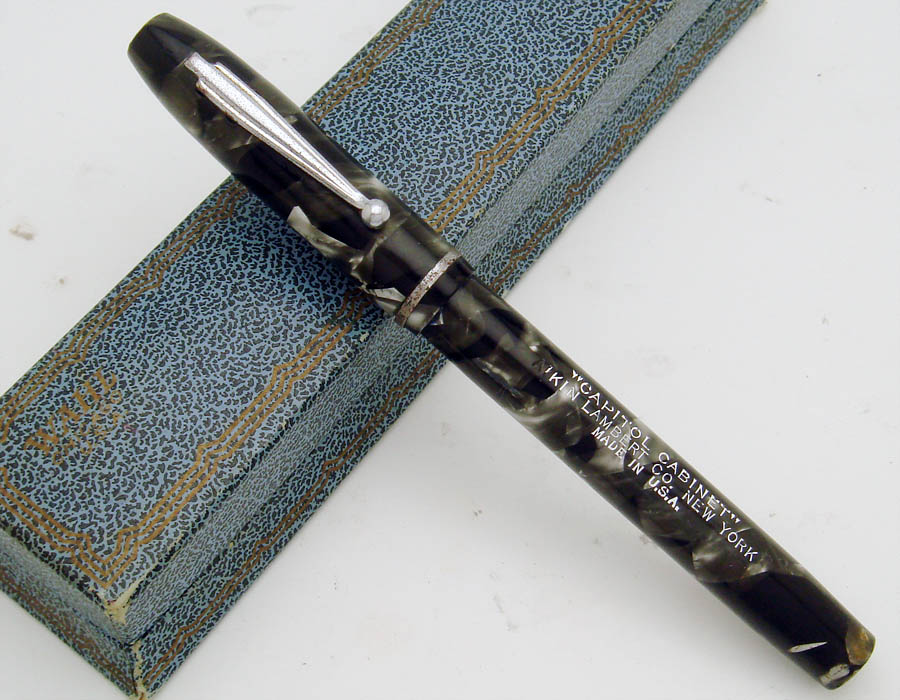 Here is the Combo with the proper cap applied. 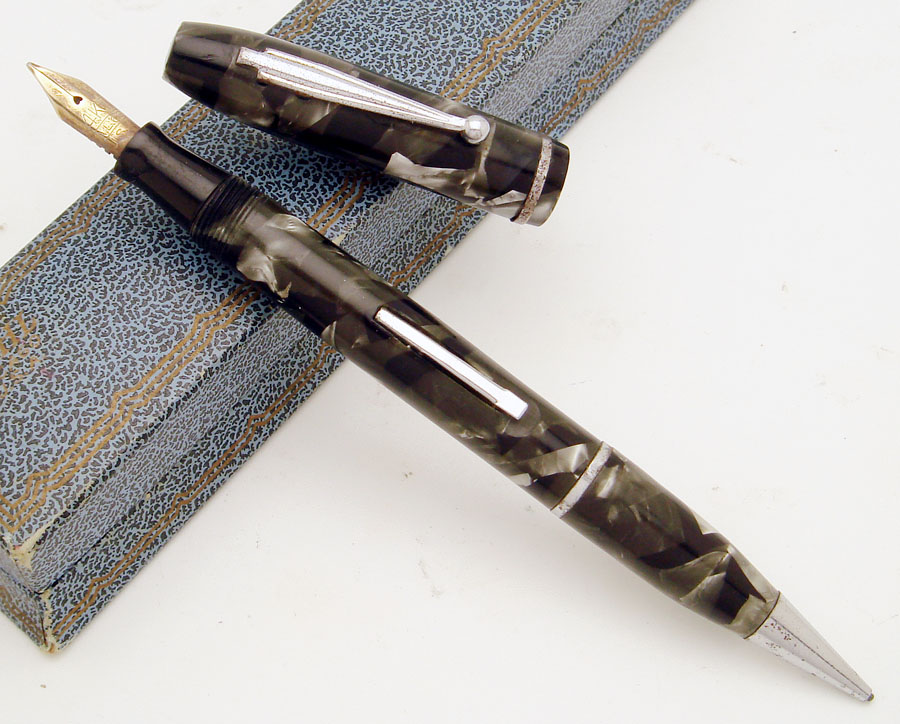 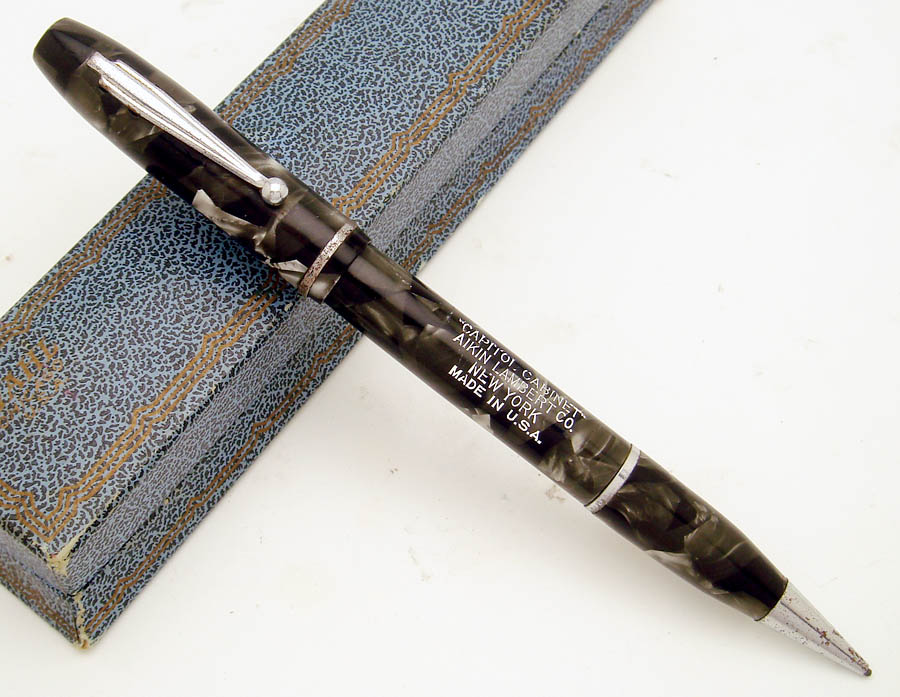 Pen parts can become complete pens. PENnant Magazine, possibly Pen World International, and innumerable online discussions have detailed the hunt for missing parts. I never expected to be able to turn my Aikin Combo barrel into a complete Combo. Yet, here it is.

The only sense that's common is nonsense...

So is it now a de-franken pen? Depending on how long it had its Ambassador cap, is there an issue in putting back an original cap that is not THE original cap. Facetious invitation to useless ethical discussion. Seriously, I have two Aiken Lambert "'Mercantiles" with very nice nibs.

Cap looks like it's been there all the time

Good call, Silviu. If the shoe fits. I guess that is not the same as that Texas expression, "All hat and no cattle" or All hat and no horse."

You've gotta love the thread that spans a few years.

I don't have a combo but I have an affinity for Aikin Lambert pens, especially that color.  It was the first vintage pen I bought.  It caught my eye in an antique store because it was identical to the one my dad had. He had a pen and pencil set.  It was before replacement parts were available... at least as far as I knew.  It needed a new sac and pressure bar.  I took a Sheaffer squeeze CC apart and used the rubber sac on the pen and the placed the squeeze filler in the pen so it would depress the sac when I worked the lever.  It worked.  Sometime later I replaced them with more accurate parts.

The story of the cap reminded me of a time when a friend who knew I liked pens brought be a sack of pens he'd got at an auction.  He expected me to pay him back.  They were mostly Sheaffer cartridge pens but there was one Conklin but the cap was missing. I thought it would be next to no chance of ever finding a cap for it.  However a year later that same person called me from another auction and said there was another sack of pens but he wanted me to come and bid on them myself because he didn't want to take a chance on getting some more worthless pens.  Well there were some very nice pens in this lot and when I got home with them, there was a cap with no pen. It fit the Conklin perfectly.  I don't know if it is accurate or not but it fits.

PS I remember reading somewhere, I think it was in Pen World that it was thought that Aikin Lambert made nibs for Waterman before they acquired them.

I have about a dozen Combo pens I picked up in a pen load last week. I will be blowing them out at various pens shows.