7 replies to this topic

I've had the pleasure to handle many hundreds of Wahl metal pens over the years, own a few dozen here and there, and photograph oodles. Nice pens.

At the LA Pen Show last year (2012), I bought a nice collection of Wahls, including perhaps 20 metal flat-tops from the 1920's. Only lately I've looked closely at some of them.

So, here is a pair of the pens from the LA hoard. Tiny things with #0 nibs. Not sure they were called babies/midgets/what-have-you (I'm away from my catalogues). I've owned probably ten over the years. < 4" and skinny things. Here they are on my usual photo prop box (a Wahl box from probably the mid-late 1940's, which holds standard size pens). Note how little are the pens. Solidly made. High quality. 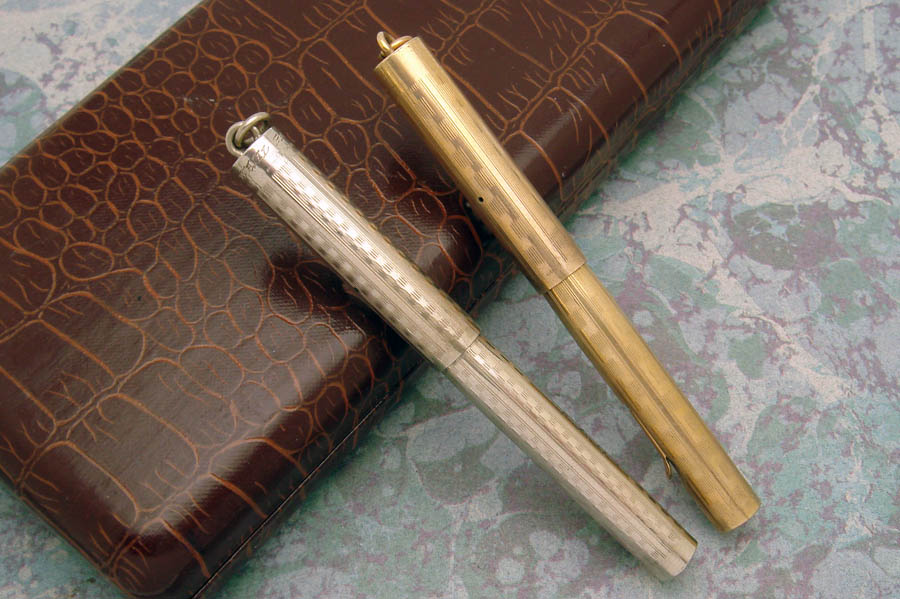 But, what i just noticed on the "silver" pen was what appear s in the second photo. I play at Wahl with some seriousness, though I don't recall discussion before of the following. Perhaps just my ignorance, but I find this... charming. First I've seen... or at least noticed. 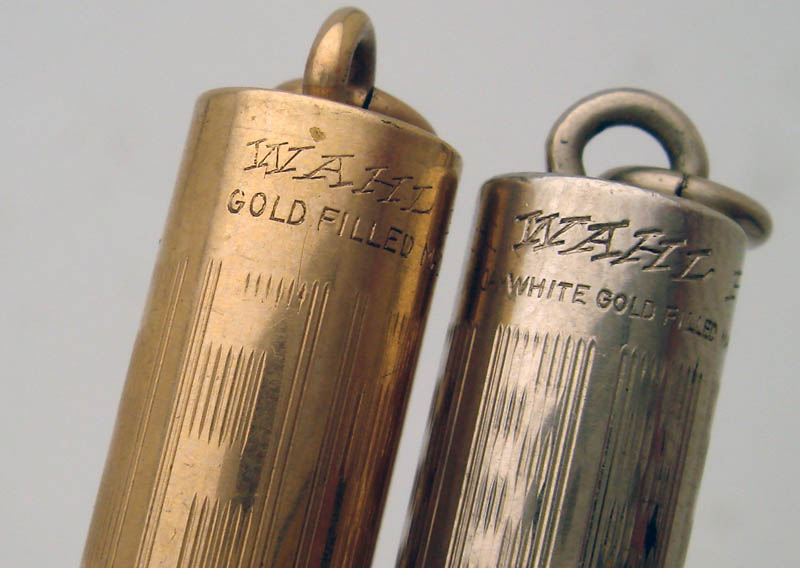 Now that is a wicked cool find David. I'm interested to hear what the catalogs have to say.

0's with white gold are uncommon but not unknown - I have one. I think it is filled - I'll have to look.

Found it. White gold filled same pattern as you are showing in the 0. I doubt we will find white gold in anything larger.

White gold (filled) pens and pencils are one of my many sub-collections. I have had several of the "0" size Wahl pens in white gold filled, as well as the matching pencils, and have sold a few examples through my online catalog over the years. I don't recall seeing them listed in any Wahl catalog, but I've never gone looking for them there, either. Never have seen any larger Wahl-Eversharp pens or pencils in white GF -- that would be something I'd like to have!

Other white gold filled metal pens and pencils that I have seen: Moore; Conklin; Twinpoint; Eisenstadt.

I have a very pretty Conklin set in RWG Modle unknown it is in its original leatherette box with gold trim. Pen measures just under 5" capped and nib is a 3 size, pencil is 5.3" long the eraser is missing. Cliips are standard Conklin flat spring type. The case is blue lined velvet. It is initialled on the indica RPH. Neat set I have had few white gold pens. I woild post a pic but don't know how to on ths message
Jerry

This is also a first for me. I received this pencil a couple of months ago. It is US made and a very slim pencil indeed. It is missing its ring unfortunately. It is 3 1/4 inches or 8.2 cm..Is this the pencil that goes with David's Pen?

Add one more to the known universe of white gold filled Wahl pens.  A friend gave me one this evening in the same checkerboard pattern as David's. Wahl called this size the miniature.  The matching pencil, however, is a midget miniature.  (The miniature pencil is bigger....)