38 replies to this topic

Here is a file shot I have. It will be Tuesday or so before I can handle them and post more detail on them.

Hi Pat,
Is your 18K set custom made for Jewelry maker or for Sheaffer's own ?

I saw a 18K snorkel made for Catier which has different pattern from your sample.

Sorry for the delay. I had these pens stuck away and had to get to them to respond.

The lined Snorkel set on the left is 18k, stamped "Sheaffer's OR 18Cts" on both the pen and pencil. There are additional hallmarks on them as well. The nib is a two-tone Sheaffer's conical nib marked 18K.

The Snorkel on the right is 9k, with basically the same pattern as that shown by Roger, above. It has a two-tone conical nib marked 14K. Lots of other hallmarks on the pen.

Both pen are Sheaffer's own with no indication that they were made for another vendor.

Hi Pat,
Thanks for your reply. My 9K snorkel is similar to Roger's but slightly different from yours.

The 18K snorkel which I saw was having class Cartier pattern, no white dot, 18K 2-tones Triumph nib marked with Sheaffer's, 18K and hallmark; on the cap lip, it also stamped with 'SHEAFFERS OR 18Cts Cartier' (I copied most of the details on this pen when I saw it)...

Sorry, I still having problem to make the attached picture bigger

The nib on the 18K pen is simply marked Sheaffer's 18K and hallmarks.

I checked several 14K snorkels today which all have 14K Lifetime nibs. Not sure if we can conclude anything with certainty on this small sample but there does seem to be a nib difference as the K content of the pens change. Perhaps Roger can let us know about the nib on his 9K Snorkel.

I'll try to post photos of the nibs if I can take any that show enough detail, which will be a challenge for me.

Here is a shot of the nibs on solid gold snorkels. From left to right: 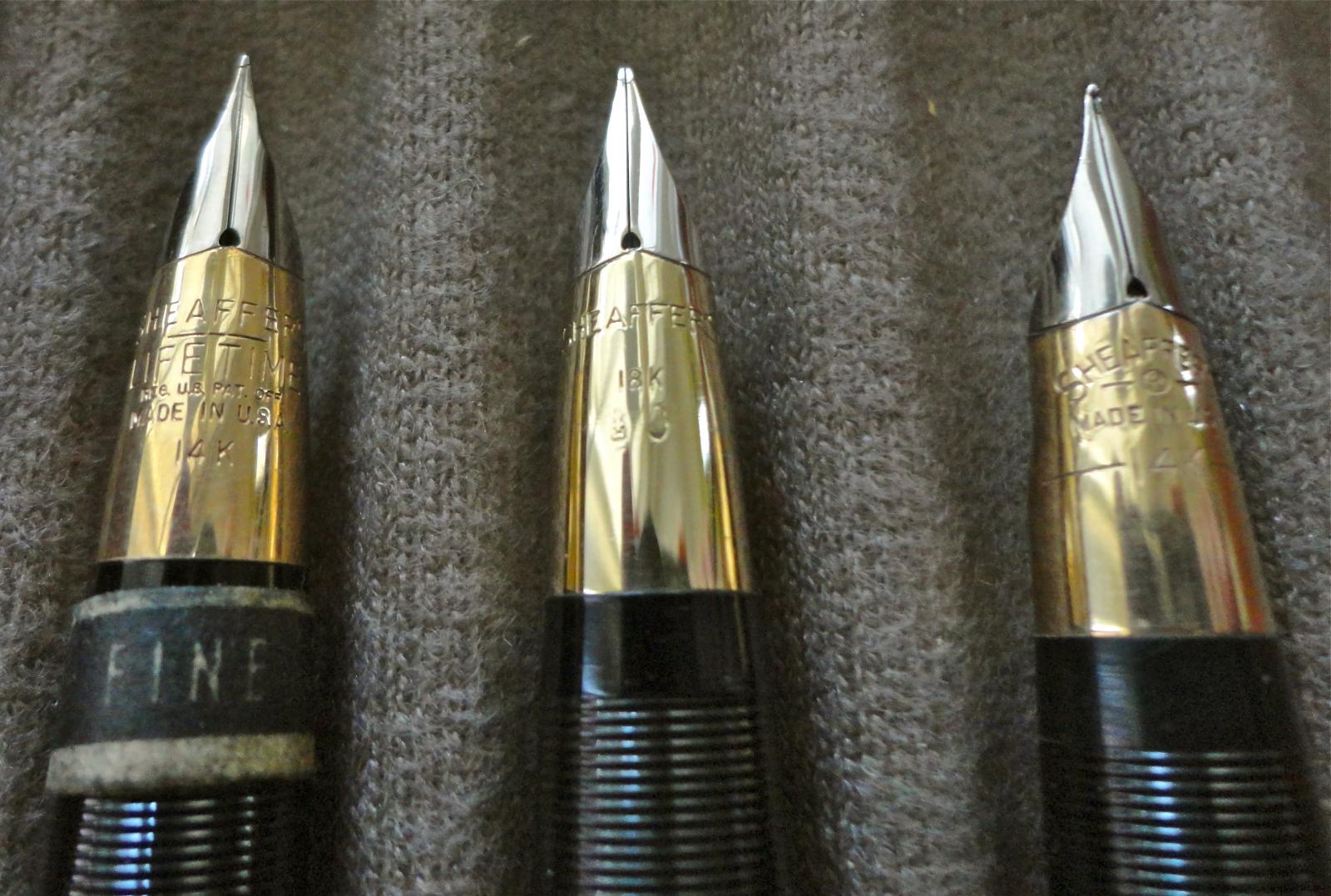 Time for a silly question..Wouldn't a "lifetime" marked nib be out of the ordinary for a Snorkel?

Very good and not silly question. For non-solid gold Snorkels I believe that to be correct, but I've taken a look at four 14K solid gold Snorkels today and they all have "Lifetime" nibs. Perhaps the "Lifetime" nib went with the 14K pen? It's interesting that the 18k and 9k pens - at least the ones identified in this thread - do not have the Lifetime nibs while the 14k pens do.

Very good and not silly question. For non-solid gold Snorkels I believe that to be correct, but I've taken a look at four 14K solid gold Snorkels today and they all have "Lifetime" nibs. Perhaps the "Lifetime" nib went with the 14K pen? It's interesting that the 18k and 9k pens - at least the ones identified in this thread - do not have the Lifetime nibs while the 14k pens do.

HI Pat,
Thanks for the pictuers, my 14K and 9K snorkel are having the same nibs as yours,

In regarding the Lifetime nib, Sheaffer had given up lifetime warranty to most of 'white dot' products but still keep this guarantee to Masterpiece pens.
As seen in 1953 Catalog : " Materpiece snorkel pen with Lifetime point will have unconditionally guaranteed for first user's lifetime without repair charges..."
Due to this reason, the 14K Masterpiece snorkel is having Lifetime nib while the other snorkel with normal 14K points.

Agree with you that it may be an interesting topic to find out why 18K & 9K snorkel do not have Lifetime nib...

Thanks Pat and CC for the information. Looking in from the "outside" I'd speculate ( okay...guess..) the 9ct is a later model , the 18ct an export model and Roger's has a different marking again !! Don't you just love Sheaffer!! On thing I do find interesting is the lack of Country of Origin on several of the nibs, I've noted this on South American and some Australian pens. The markings on Roger's are often seen on the Australian Snorks made into the '60's, I have a Crest (Aust.) with that marking. I may well be wrong but to me Sheaffer US made nibs always seem to make it clear they are American...I lack a base knowledge on UK Sheaffers comment on them. I look forward to your thoughts.

Must have me a bad 14K solid pen as the nib is NOT marked lifetime.

We can always count on Sheaffer to be inconsistent.

We can always count on Sheaffer to be inconsistent.

If the Masterpiece 14k pen was produced for the entire Snorkel run, there was plenty of time for evolutionary tweaks. Not that this excludes swaps and such as potential players. Recollection is that imprints on the PdAg nibs evolveda

Here's a bit more eye-candy. Everything shown has a significant feature. 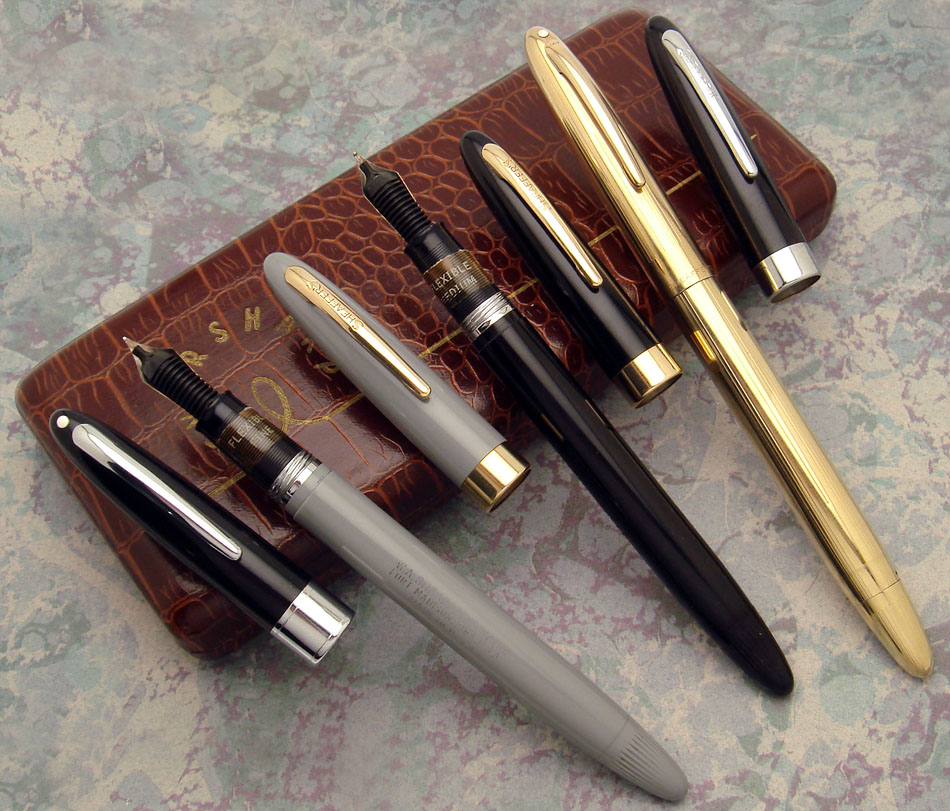 Nice selection, none of which I've encountered "in the flesh" as such.

Are thos Reverse Trim snorkel only in Black ?

Are thos Reverse Trim snorkel only in Black ?

Yeah, given that a minority of Snorks have nib grade stickers still in place-- though Snorks are found minty more often than are pens from older series-- and given that flex nibs are very uncommon amongst Snorks, I am not surprised that not many "Flex" section stickers are seen. In fact, these are the first "Flex" stickers I've had. Both pens-- better still perhaps-- have engraved codes indicating flex, "FF" for the flex fine pen and "FM" for the flexible medium pen. These were part of a largely NOS hoard of 20 pens I bought from a fellow dealer at the Ohio show, a batch that included several of the pens shown in the two earlier photos I posted.

My current experience is that reverse trim is found on Snorks only for black pens.

While I have done a Snorkel profile (still needs tweaking) and have a couple original Snorkel catalogues, I have not researched Snorkels with quite the intensity I've put into my Parker Vacumatics. My recollection is that Sam Marshall's authoritative review of Snorkel in PENnant back in 2002 did not mention reverse trim pens. My catalogue does not cite the reverse trim pens. I have one set that has some attached tags with handwritten codes that might be model/variant codes. I really must review the number shown. I cannot insist, but I have vague recollection that Kirchheimer dropped hint that the reverse trim variant might not be undocumented by Sheaffer, but at this point I do not have such documentation.

The reverse trim pens are frankly scarce, recognizing that individual experience can vary and that it is possible to miss items up for sale, either at shows or on ebay. Still...

Since learning of the pen perhaps 2.5 years ago (perhaps more recently) when I stumbled across one, I've managed to score boxed sets both white dot and non white dot. I've seen one or two sets which I did not manage to buy. My big score was buying from a Sheaffer employee cartons of NOS 1940's-1950's Sheaffer parts, which included 7 NOS reverse-trim Snorkel caps. I am (or will be) offering those caps (either alone, or integrated into complete black pen) through the website, You can see two in the photo above, the white dot cap having been claimed by a want list. So, all told, with aggressive hunting and with a lucky strike of 7 caps, I've seen about 10 or 11 reverse trim Snorks total, fewer than Fern, fewer than I have demonstrators and all the "rare" colors save of course for the mythic all-Fiesta. in theory a black NWD Cap pen can have three different nibs (three models) and a White Dot plastic cap pen can have two nibs (two models). Since I have no information on reverse-trim caps other than observation of them, I cannot say if they were meant for release in black in all possible models.

Since stumbling into Snrokeldom a few years ago (it was an accident, really!), I've owned hundreds of Snorks, mostly for resale, but have-- inevitably-- built a small collection, currently fewer than 15 pens, and likely never to exceed that number. All the Snorks I own are better variants, recognizing the subjectivity of that. The only two I really would like to add to my own collection are the 9k and 18k "Masterpiece" variants of the sort shown above by Pat and Roger.

Here's a shot of my reverse trim white-dot set. 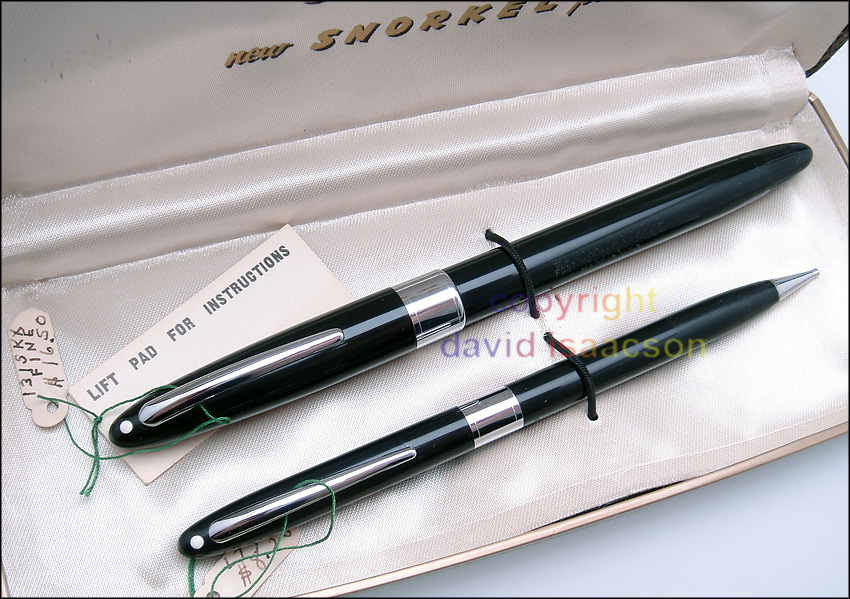 Since I learnt Reverse Trim from Roger and you several months ago, I am lucky enough to get hold of 2 Reverse Trip WD samples...

I have 2 Flex snorkels, all are traditional 14K single tone nibs without marking or label. I confirmed they are Flex nib by testing with slightly pressure.

NWD Reverse Trim, 18K ,Full Fiesta Red and of course Triumph Flex, Music nibs are in my wish list to complete my snorkel color and models.

Back to SHEAFFER (USA "Big Five")