84 replies to this topic

On FountainPenNetwork, there is a thread in the Montblanc forum which is called "the rare ones". People do post there Pictures of their pens, of which they think the should be called "rare".

I did some Research here on he board and didn't find that much about vintage Montblancs. But Montblanc was one of the most importand manufatcurer of vintage european pens. I noticed that recently some serious Montblanc collectors joined this board, that's why I thought, we should start a similar thread here. Because I hate to decide which pen is "rare" and which not, I simply called this thread "pics of vintage Montblancs". I think this is focus enough.

...now the bad news: I do not collect Montblanc pens myself! When I came to the Hobby in 2004, Montblanc pens have been already very sought after, and to expensive for my wallet. But during the years, a very few MB found their randomly way to me and stayed. So I'll start with this ones.

Here's the first one:

It's a Montblanc Meisterstück 138 from ca.1939. The pen is a piston filler and is fitted with the famous telescopic mechanism and a steel nib. I got this pen from a friend in bad condition (not the friend). This is one of the few pens I own which I didn't restored by myself. Francis Goossens did a great job in repairing the mechanism.

This is a Montblanc Meisterstück L139. Probably a pre war example because the cap and the filling knob are made of hard ruber and the barrel has the so called "long window". The pen came to me in perfect condition and I just had to disassemble and clean it and replace the cork seal. Easy job....nevertheless I was quite nervous while doing this

There's one thing I'm not sure about: The nib is just plain gold. No platinum plating. I don't know it this is original or not. But there have been no signs of plating on the whole nib. The third and last for the moment:

This one is a little bit special. It's a Montblanc Meisterstück 124S. S stands for the German word "schraffiert" and means in this context chased. Now, the special thing is the chasing. It's not the common barley corn pattern as known from other 124S. It's a very unique wavy pattern. There has been lots of discussions about this pen, if fake or not and I am not an expert. Defintely not. So I just refer to Tom Westerich who wrote about a pen like this on his own homapage. See here: http://www.caprafico...4s-wavy-pattern


Now. Let's see what pens you have. I am pretty courious to see your collections, specially yours Guy, Bob, Vik, Vasco, Ariel etc...

Nice topic Christof, but I can´t compete with any of those 3 pens!!!

I have some vintage MB hard to find, but I would only say that one is truly rare, a MB 20 from the the late 20'ies early 30'ies with a solid gold overlay. It´s a push button filler. 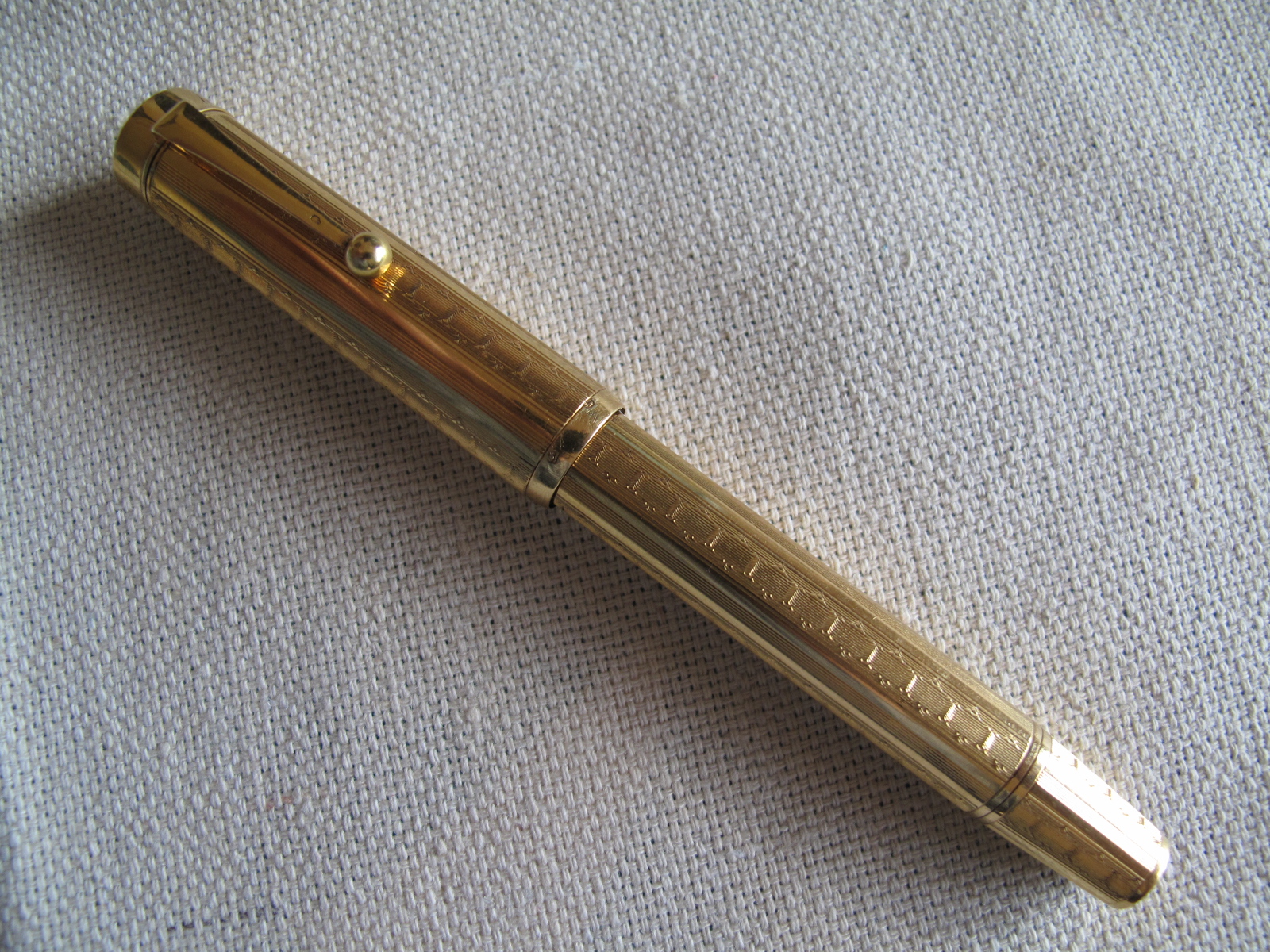 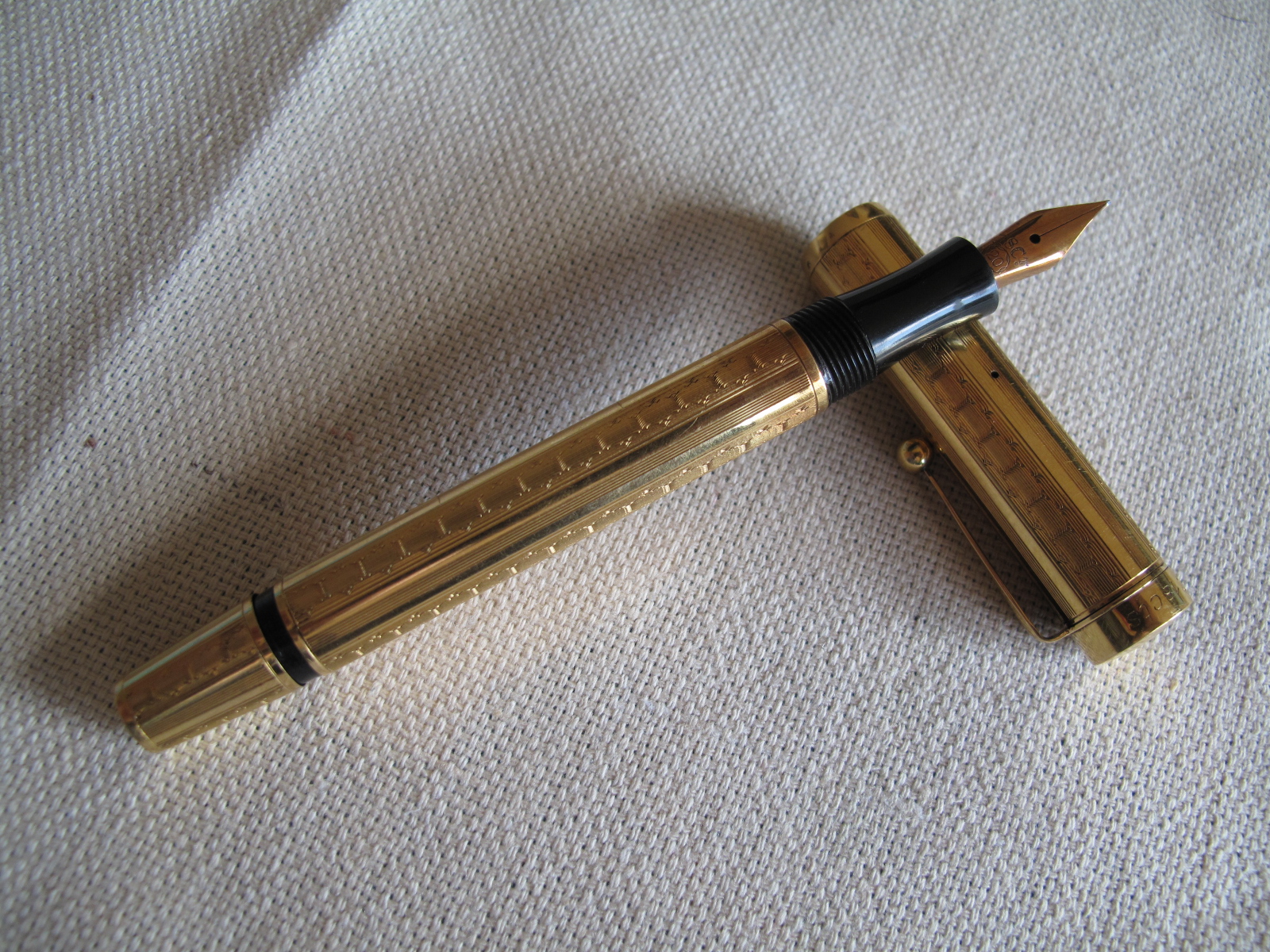 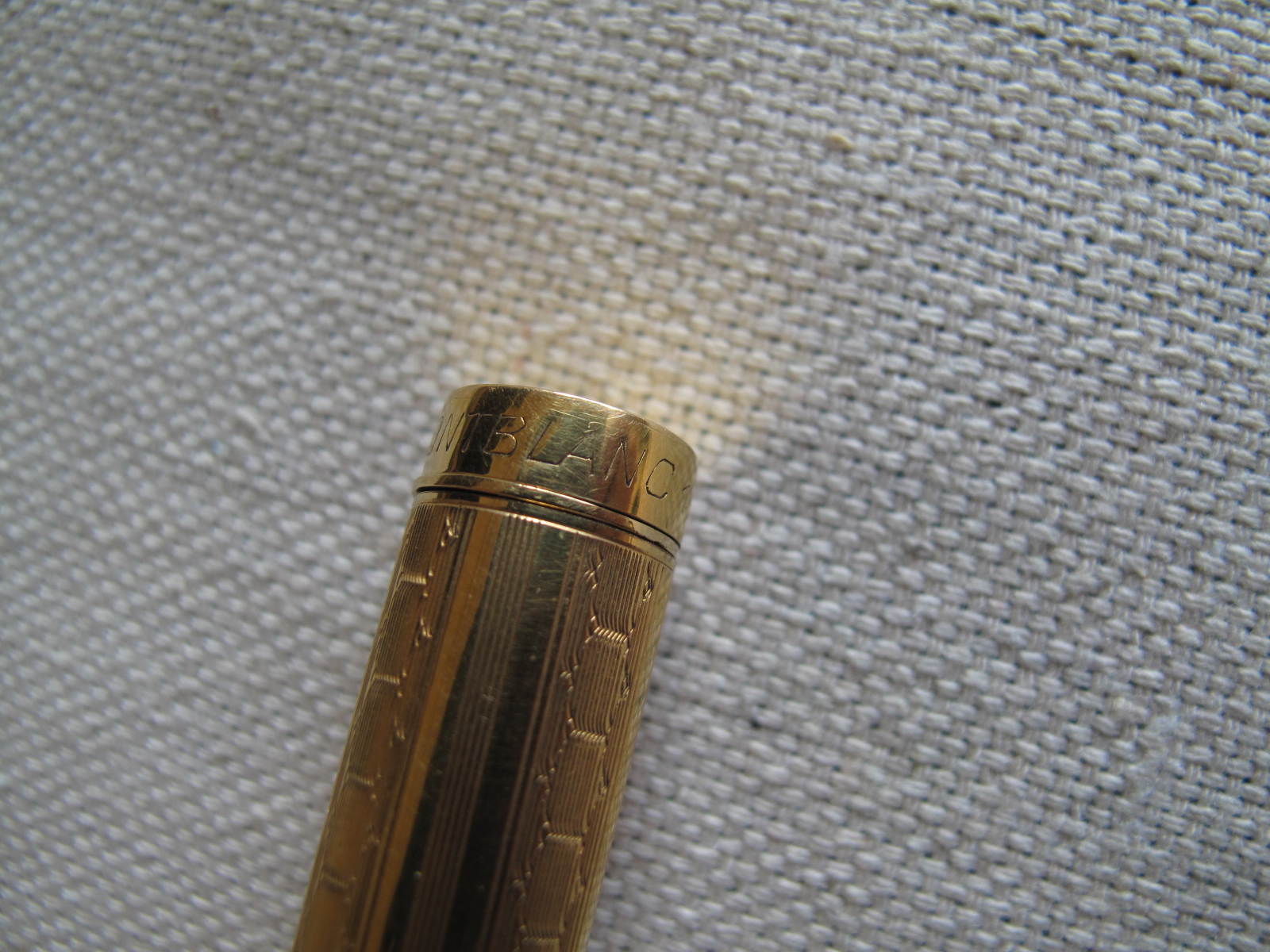 Vasco
Thanks a lot for posting these excellent pics of your great collection. Of course your pens can compete with my small batch, easily!
I specially like the Montblanc card board boxes. Just great.
Hope that other member will also jump in with some pics. Let's see what happens.
Christof

Late to the party here. Sorry!

Here are my vintage Montblanc pens... [Click on the pictures to see the 1024x768 version] I don't have a particular focus in my vintage Montblanc collection (or any brand for that matter); the collection is small in size and sporadic in theme, but they do have one thing in common: the brass telescopic piston mechanism. After collecting a certain number of vintage Montblanc pens, I have found their writing characteristics to be individually different from one another and their flexi-ness varies. That is especially the case for Palladium nibs. The Palladium nib on my War-time 136 writes like a dream, soft and responsive, while the other Palladium nib on one of my 234½ (not pictured here) writes very stiff and is close to a nail.

As for modern Monblanc-- I have few 149s laying around... with hard-to-find caps or nibs. Traveling at this point but I will send some shots next week.
Regards, Ariel

Traveling at this point but I will send some shots next week.
Regards, Ariel

That's great Ariel!
Your collection will be a shocking for some uf us...

I adore the striated MBs, but doubt I'll ever afford to own even one of them. Those are GORGEOUS.

I adore the striated MBs, but doubt I'll ever afford to own even one of them. Those are GORGEOUS.

Great pens, thank for sharing with us!! I love the 234 1/2 PL, superb and one of my all time favorite celluloids. Would love to have one

The 149 with triangle is very curious, was it made for the Arab market?

The 149 nib/fed/ section in the picture is a bit strange to me. I tough that that feed and nib would always go with a one piece barrel from the 50 in celluloid or from the 60ies already in acrylic.

@ Ariel
Travel fast!! We want to see your amazing collection!!

Yes, but that doesn't come too often though.

@ soot,
Great pens, thank for sharing with us!! I love the 234 1/2 PL, superb and one of my all time favorite celluloids. Would love to have one <<< Vasco, you should get one, they're beautiful to look at! The nib is pretty good too!
The 149 with triangle is very curious, was it made for the Arab market? <<< Yes, it was.
The 149 nib/fed/ section in the picture is a bit strange to me. I tough that that feed and nib would always go with a one piece barrel from the 50 in celluloid or from the 60ies already in acrylic. <<< I thought the same; I didn't know it was possible to fit the older type feed/nib into the newer housings. But then again, I didn't assemble this, I acquired the pen just for the nib and that's how it came to me. I'll swap it out when I get the chance.

@ Ariel
Travel fast!! We want to see your amazing collection!!

Here are somo of my vintage Montblanc pens for your enjoyment... 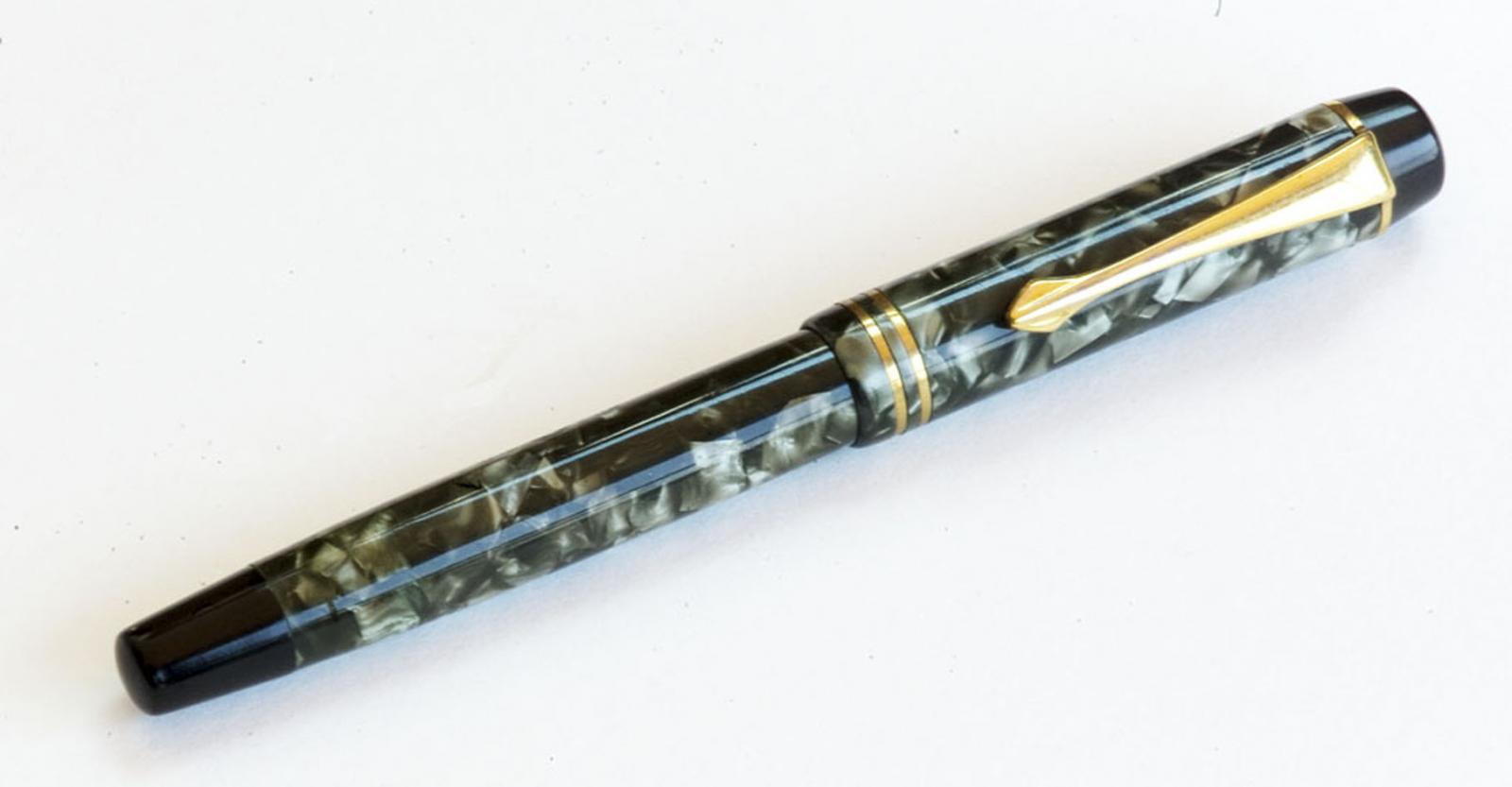 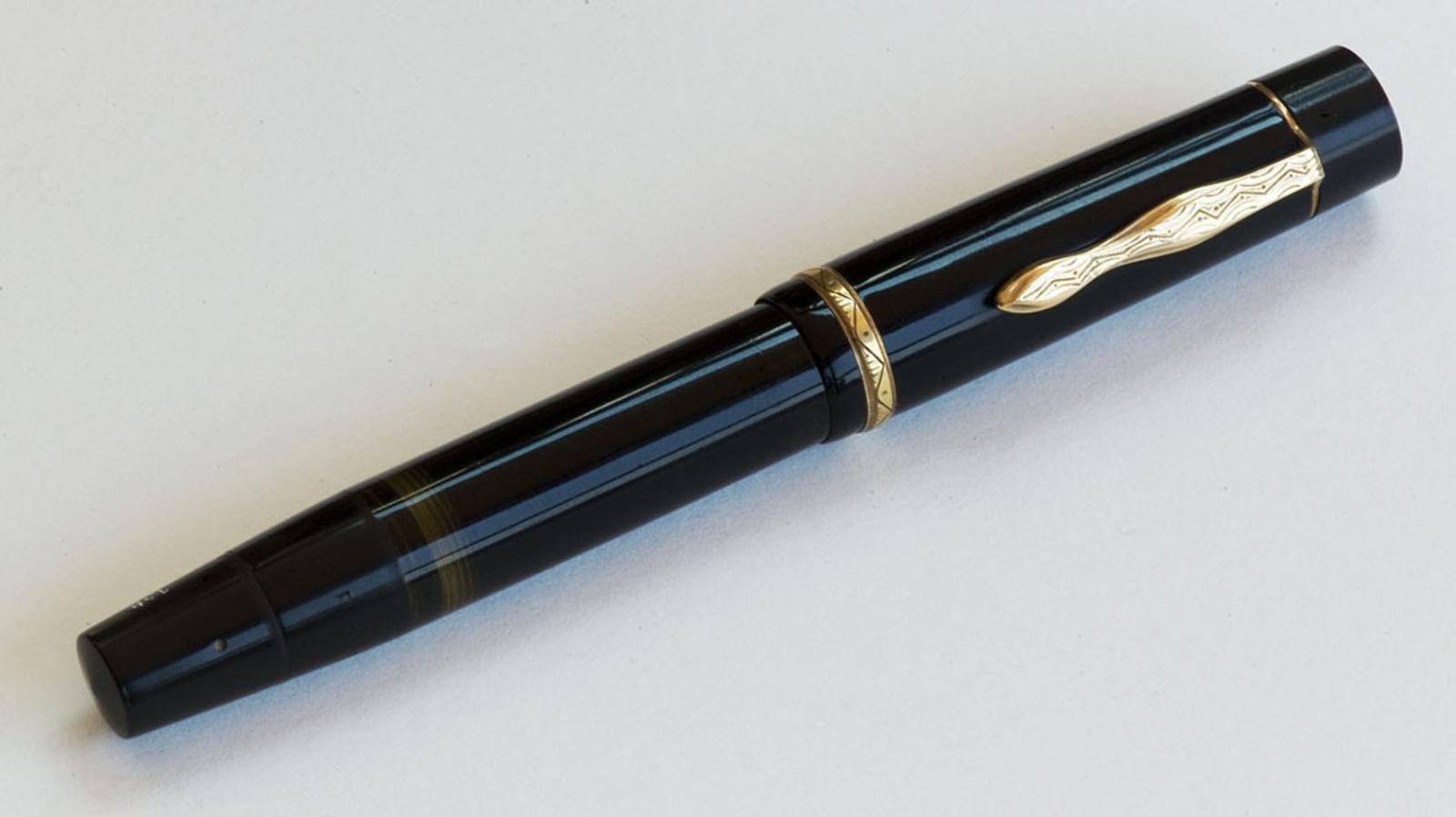 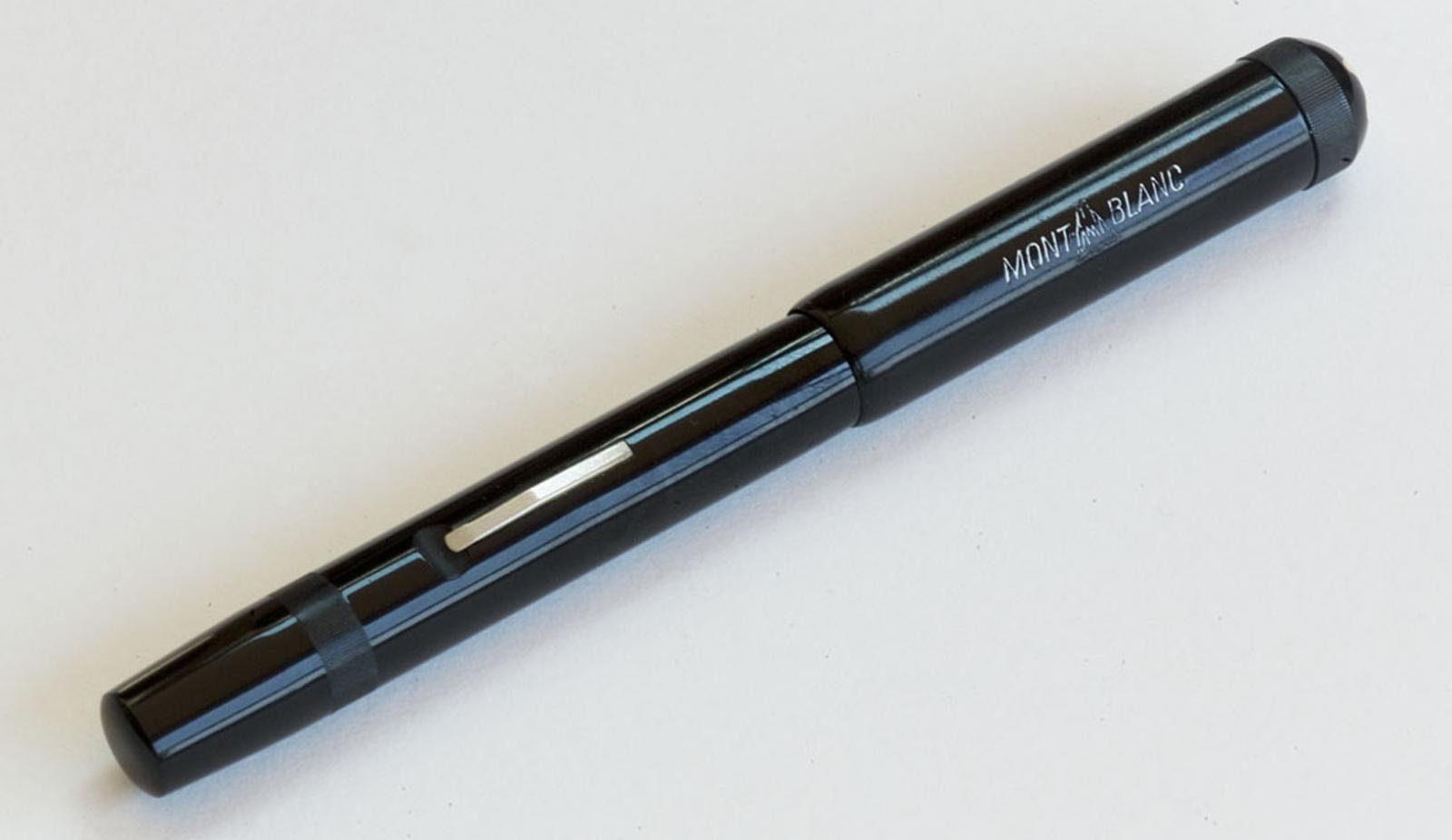 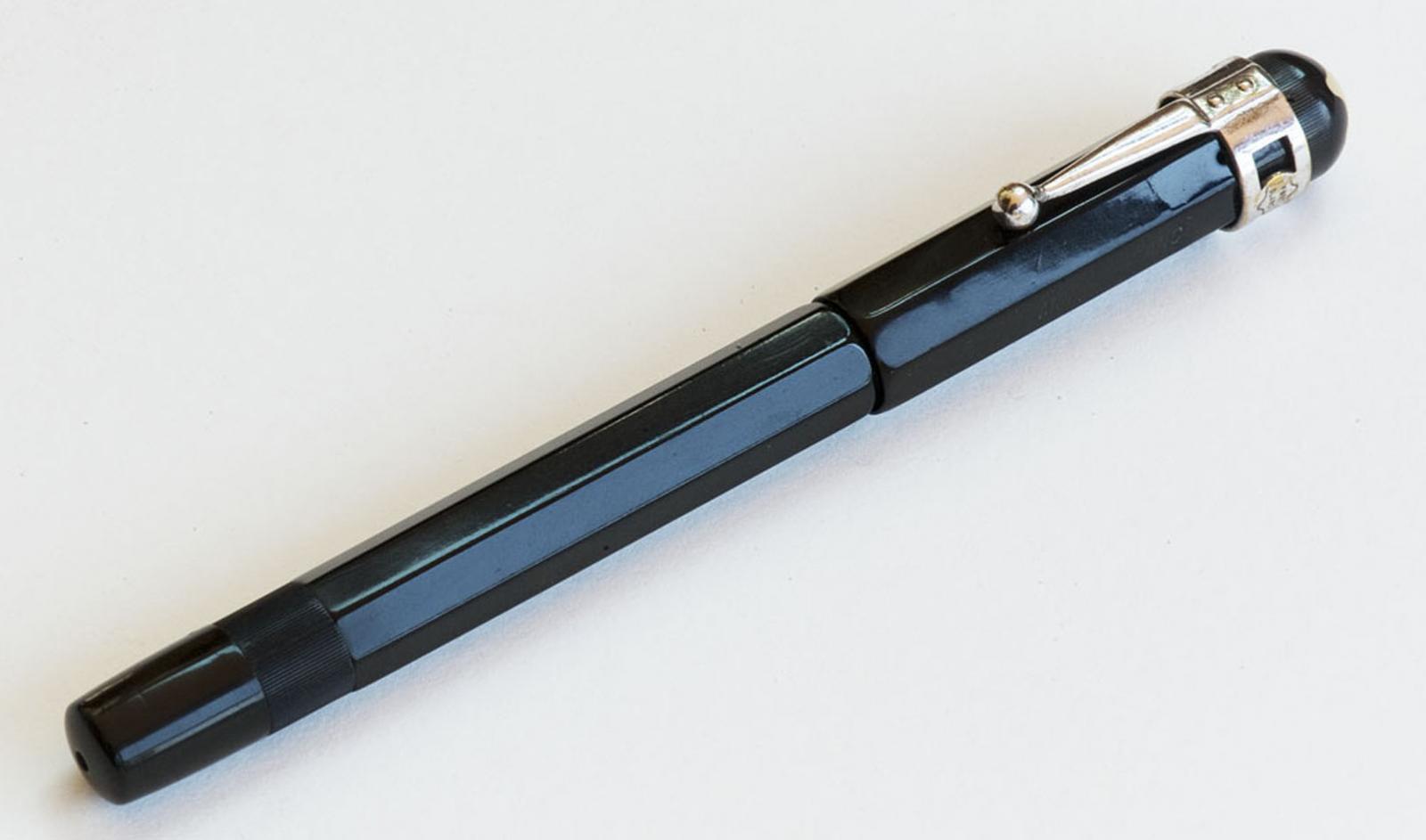 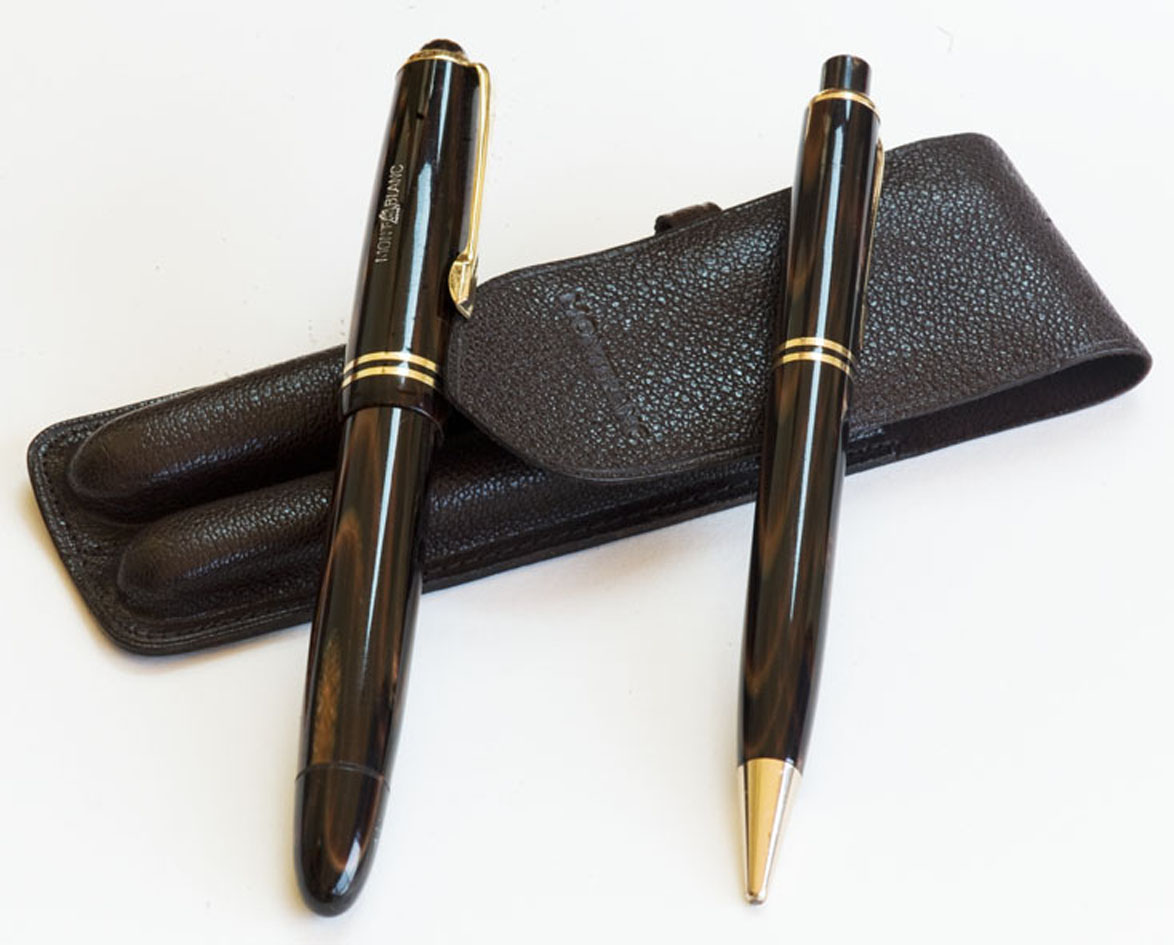 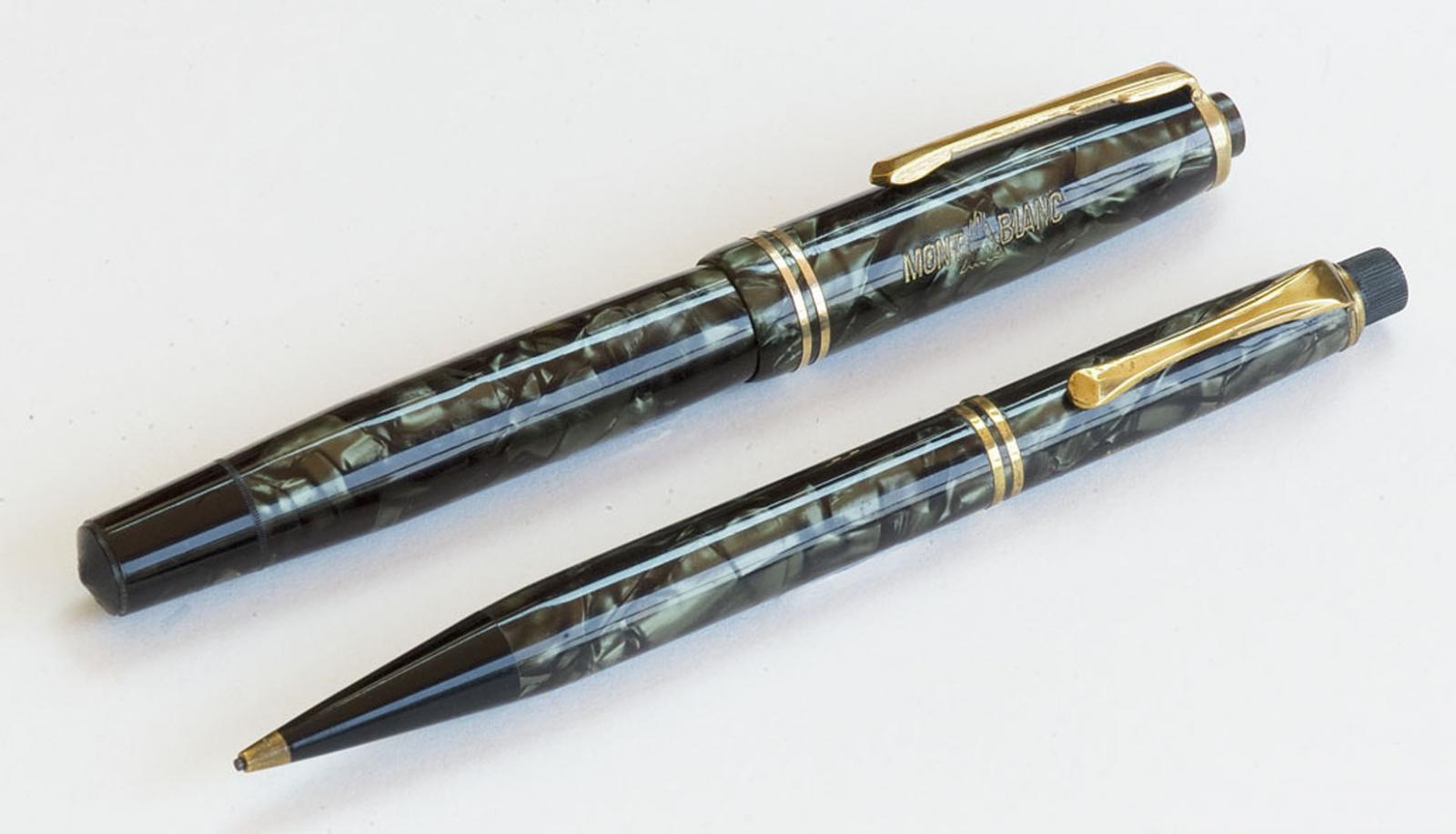 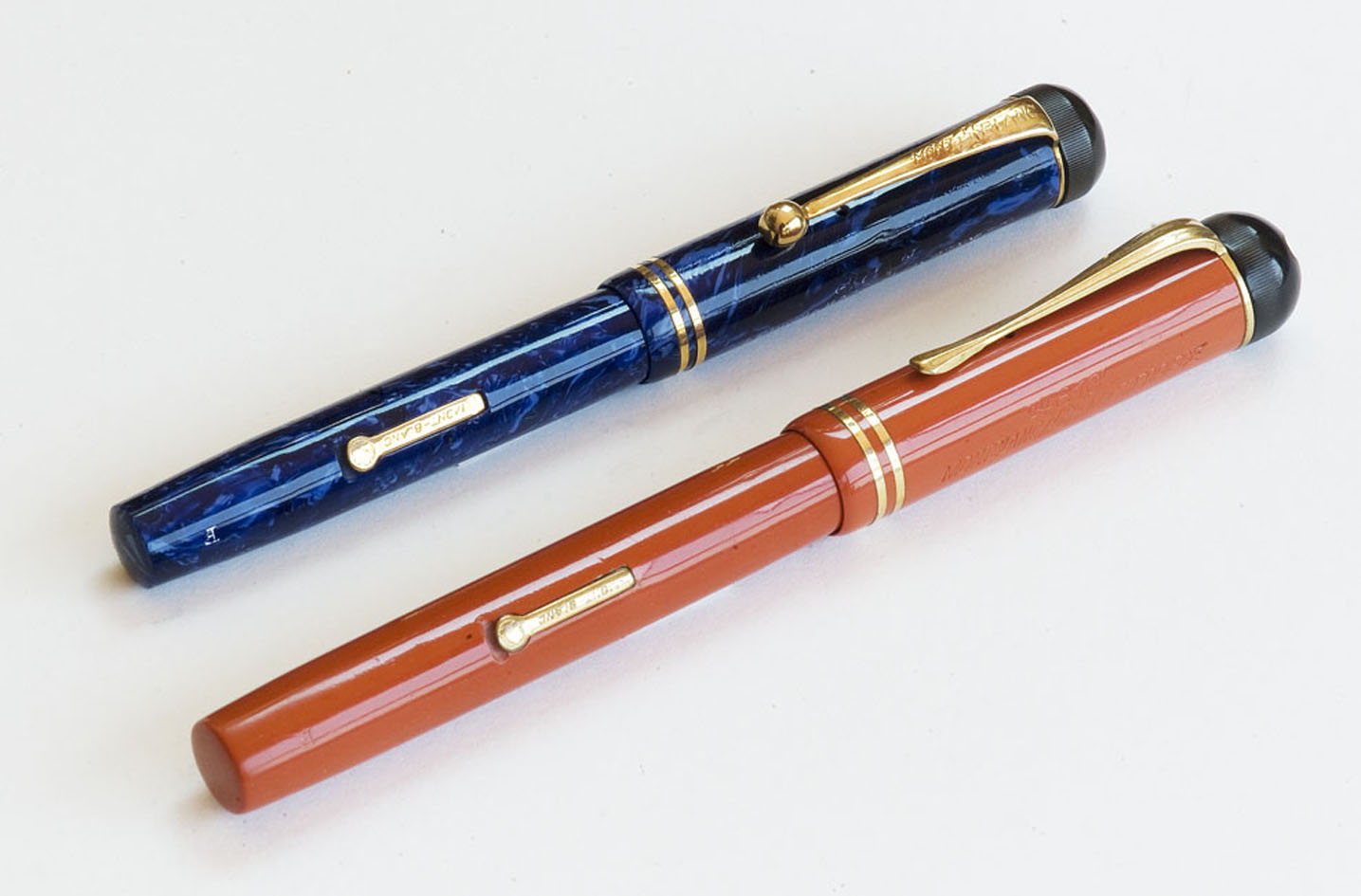 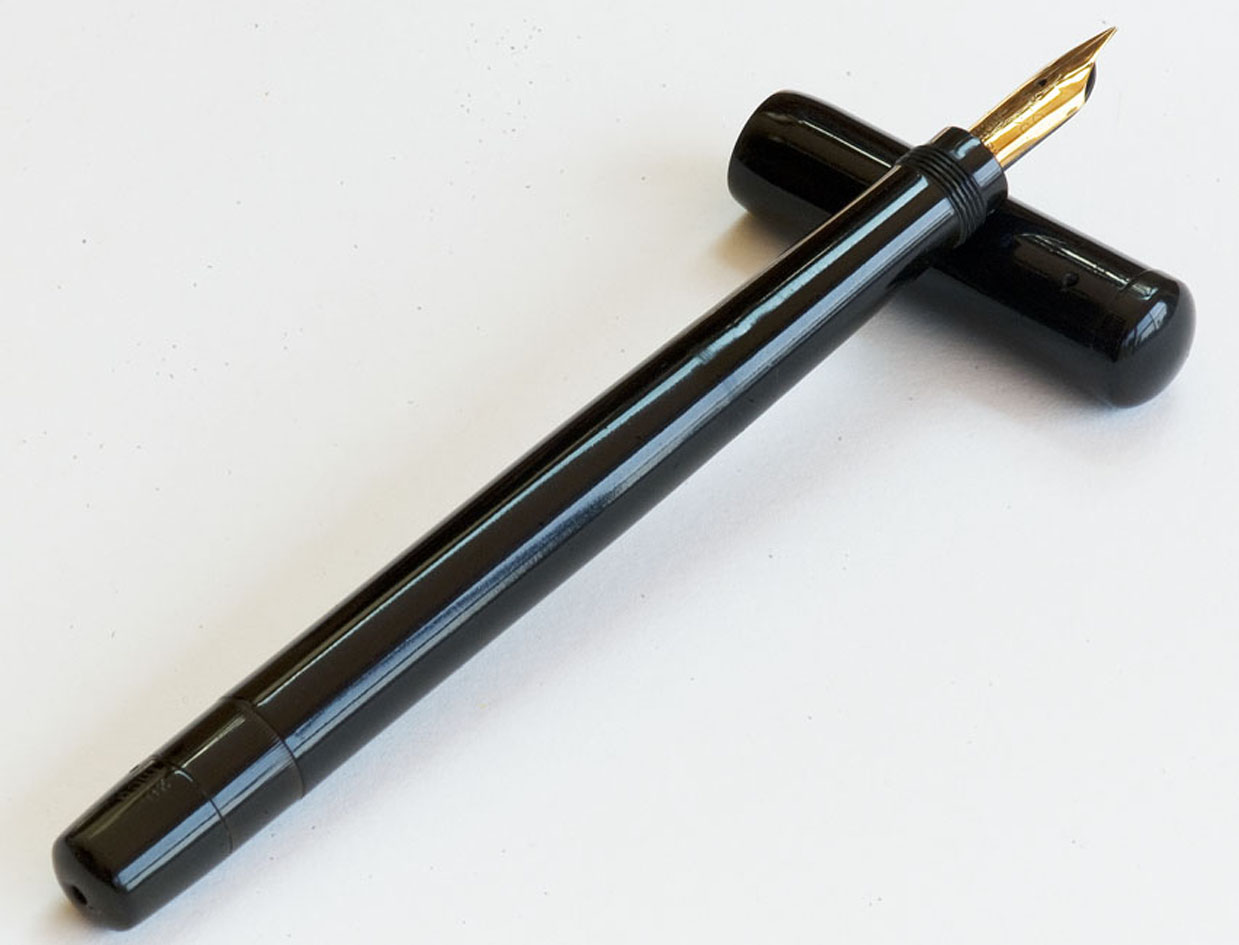 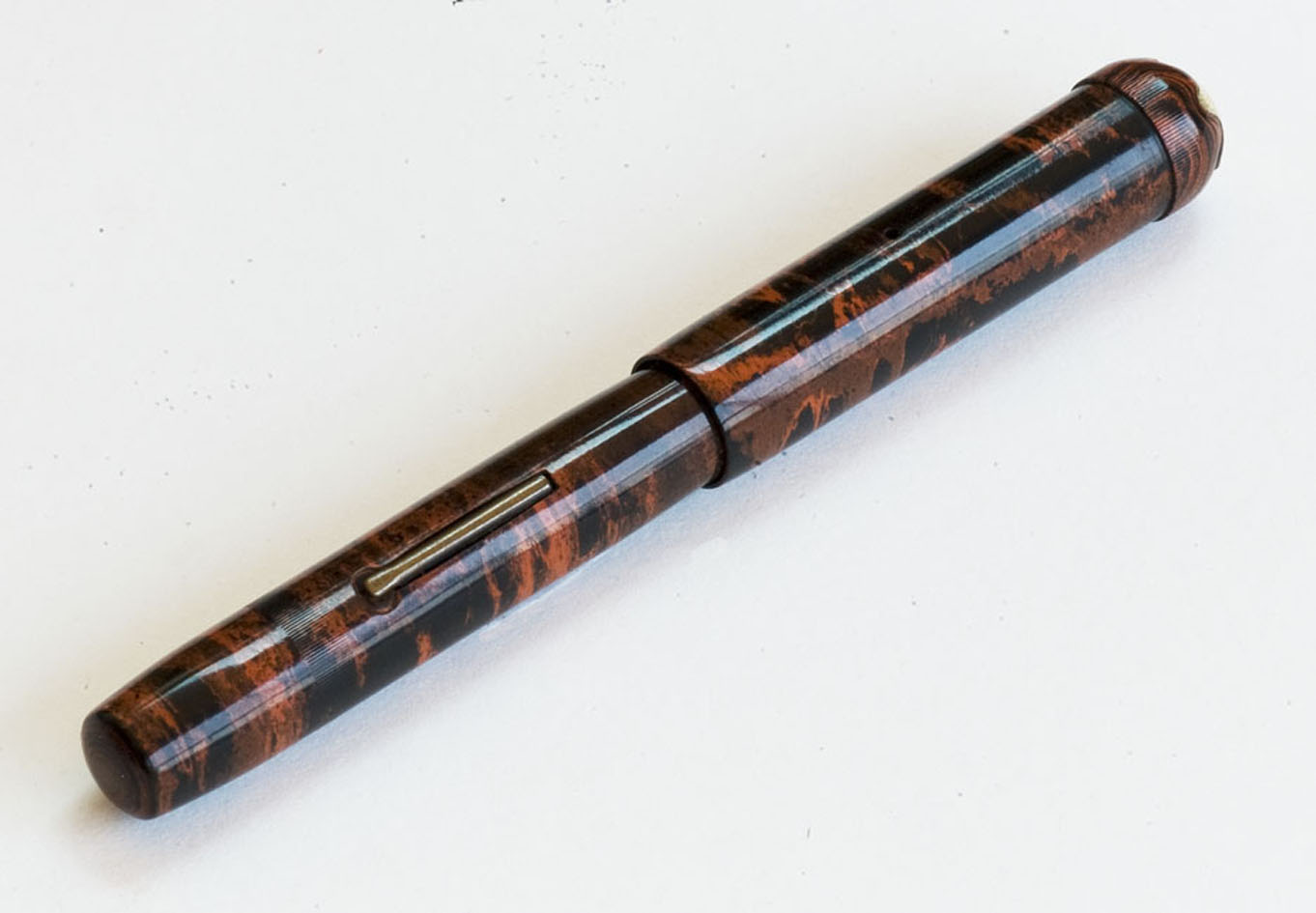 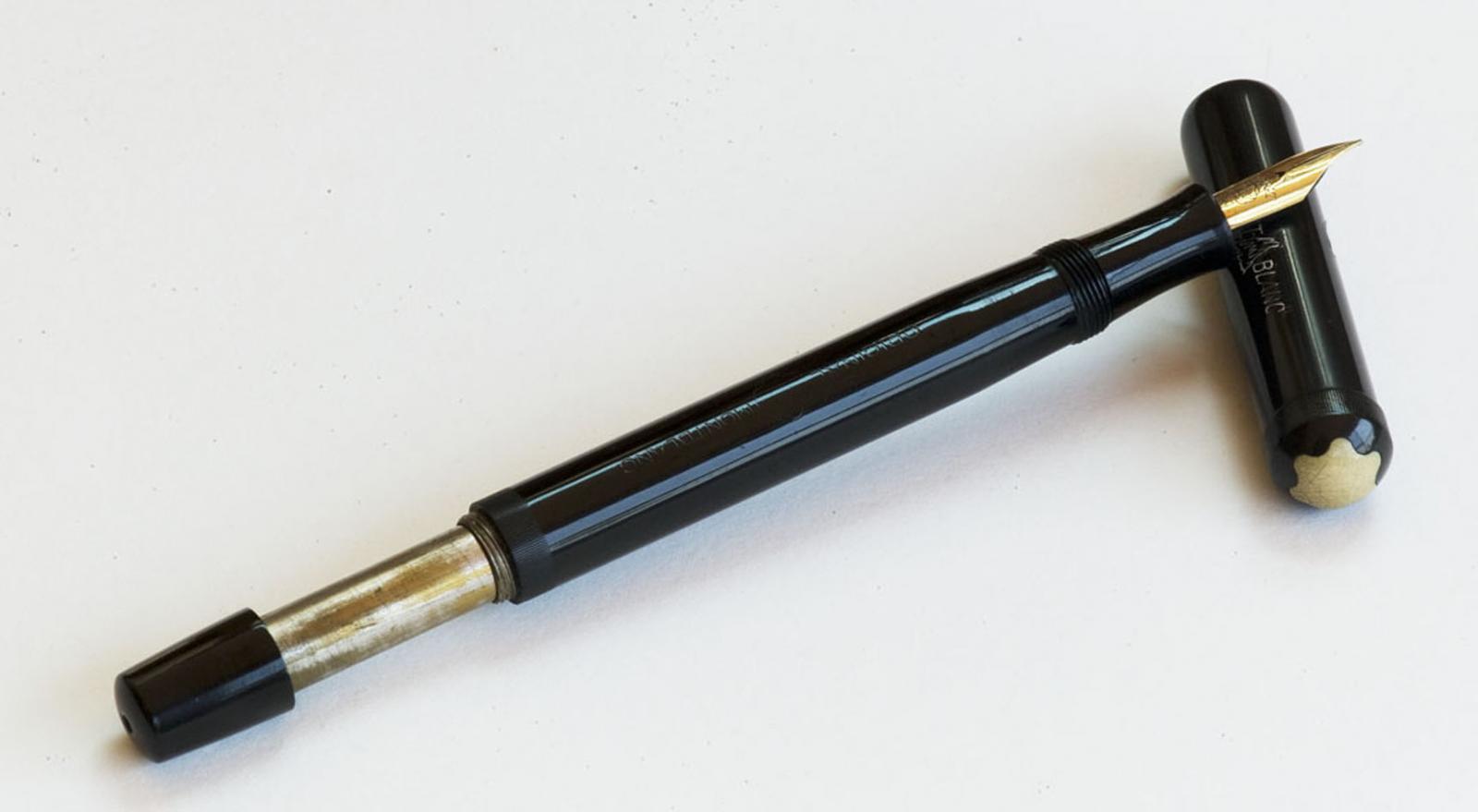 Ariel, the wait was worth it!!! The Lapis and the woodgrain are my favorites!!!
Thanks for sharing!

The Lapis and the Wood grain really stand out in this set of pens, beautiful! That engraved band 138 is also interesting too~

Thank you Ariel. These are great pens. I specially like the green marbled Meisterstück 25. This is such an atypical pen for Montblanc! It rather would fit between Wahl Eversharp Dorics and faceted OMAS Extras. ..just cool!

This thread will be a fine collection of pics of extraordinary pens! Thanks to all for helping.

I confess the Pneumatic is my favorite Ariel, followed by the woodgrain. I've never seen a pneumatic in person. But they are all beautiful!

Vasco,
For some reason the colored Montblanc are always very attractive... and lever filler !!!

Christof,
The 25 is Danish production and I found one in the new book about the Denmark Montblanc... the 322, I was told that the color was produced for the Swiss market although I found it in Hamburg !!

Wahl
you are right, their condition is surprising.

Spotted and speckled,
It is the very first time I see a pneumatic, like Chilton, it is very nice to handle.

In the next days i will add a couple of images of the metal ones.
Thanks for your comments
Ariel

That's just the photographs Ariel. I would love to photograph a collection like yours. The best will be you bring your pens with you when you're visiting CH next time and we meet for a photo shooting, haha.
Looking forward to see more of your excellent collection. Thanks for sharing.
Christof

My Montblanc collection is small and most everything in it has already been depicted (and a whole lot more that I would give a lot to own), but here are a couple of pieces not yet depicted

Just to complete what I offered I add a couple of images, and I have enjoyed the wonderful new pens that came to this topic during the last days. 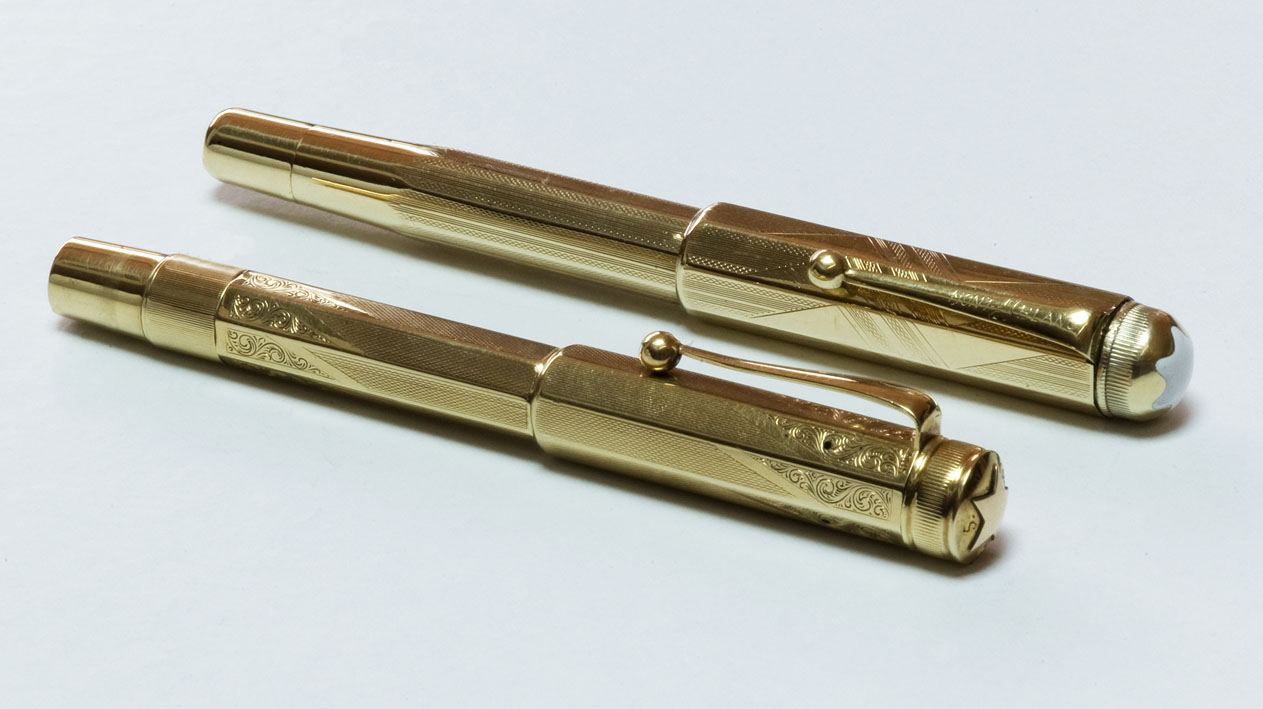 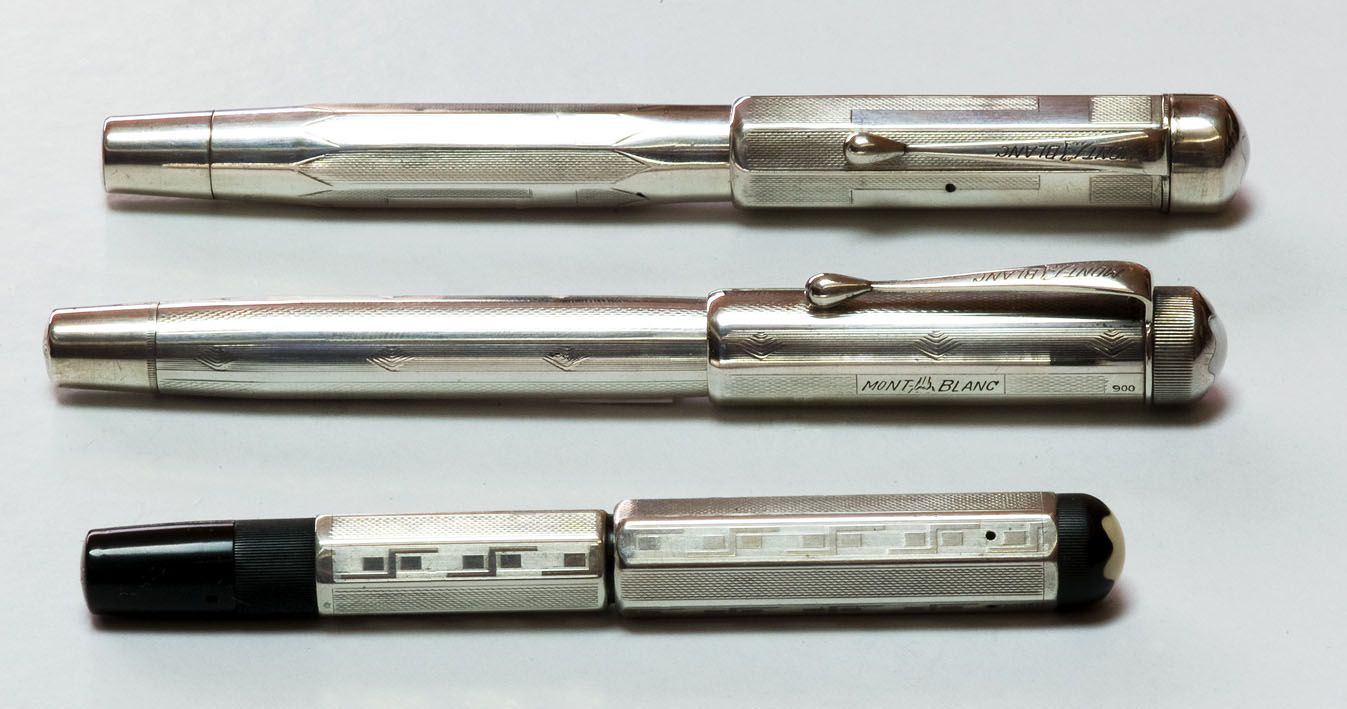 Bravo! You guys have some unbelievable pens. I can't stop returning to this awe-inspiring thread. Fabulous pens, simply fabulous.

Back to OTHER EUROPEAN and ASIAN PENS