76 replies to this topic

Both of the blue Crests are plunger fill.


Well, I did more reading-- recognizing some of the limitations found even in those very nice 1947 and 1948 Workbooks-- and I remain without perfect answer. Indeed my headache grows.

But the 1947 catalogue shows only the larger size (price) pen for the two lines in non-Tucky: $17.50 Crest Deluxe and $15. Sentinel Deluxe. I'd speculated the smaller clip-version pens had been discontinued before the 1947 catalogue was issued.

However, the injection-plastic era 1948 catalogue again shows larger and smaller clip pens in both Crest and Sentinel family. Crest Deluxe $17.50. Thinner Crest $15. Sentinel Deluxe $15, thinner Sentinel-- if the catalogue is to be believed-- also now $15.

Yet, with another "however", I note that the 1948 catalogue for Tuckaway shows still just one size (as with prior catalogue) for Crest and Sentinel, still calling the Crest a "Crest Deluxe" and still calling the Sentinel just 'Sentinel". But, for Sentinel Tuckaway, as with the full-length Sentinel, proper, the price listed is $15 instead of the earlier 1945-7 $12.50.

All this assumes the catalogue didn't get the prices wrong (if we find a Sentinel with 1250 code that would be food for thought) or that Sheaffer just didn't screw up an imprint on a pen here and there, leading to odd finds in the wild

Again, this decade at Sheaffer is a headache.

You might want to scroll back up this thread to the picture of one of my two grey Diana's....

<BR><BR>Is there any mention in your reference data noting the two different cap band widths on both Statesman/Tuckaway II and Valiant?

Thanks for all the research. I think the key point in your most recent post is "this decade at Sheaffer is a headache". As I've been sorting through just the Tuckaway part of the 40s, I've become more and more amazed by the complexity. One of my old business axioms is "complexity equals cost", and I think that it plays true to the 40s at Sheaffer. Inventory management had to be a bit of a nightmare, and perhaps sales communications with the retail chain even more so. Keeping track of all the combinations and permutations just in Tuckaways had to be a chore.


And then we add some poetic license at the retailer level to what the factory created. Among the Tuckaway parts I have are a bag of NOS pencil caps and a bag of NOS pen barrels. I can only imagine what kind of oddities might have been created when a retailer changed out parts with either what a customer wanted or just what the retailer had on hand that worked.


I'll be posting some more shots later which should continue to show how the complexity abounded in more colors.

Based on the plunger rod list in the Workbook and info from Daniel, this may help (if correct!)

Based on the plunger rod list in the Workbook and info from Daniel, this may help (if correct!)

Not sure helps. Do we know of any post-war Celluiloid or injection-plastic plunger-fill pen called just Crest Tuckaway (vs Crest Deluxe Tuckaway)?

Or is this referencing the war-years Crest Tuckaway?

The full size Crest (but shorter/smaller than the Crest Deluxe) appears frequently on ebay, but I haven't paid attention to price codes, when present, on the Crest Tuckaway. Anyone have a picture of a $15.00 clasp-clip Crest Tuckaway? I could run a search for Crest Tuckaways in LIFE ads.

The full size Crest (but shorter/smaller than the Crest Deluxe) appears frequently on ebay, but I haven't paid attention to price codes, when present, on the Crest Tuckaway. Anyone have a picture of a $15.00 clasp-clip Crest Tuckaway? I could run a search for Crest Tuckaways in LIFE ads.

Exactly. Crest Tuckaway appears to have been a war-era model, not a post-war, so the rod-length guide might be referencing that, not a $15 post-war pen. I have post-war non Tucky Crest and Crest Deluxe. At the moment though I see no evidence for a post-war Crest (non-Deluxe) Tucky, meaning no $15 gf-cap Tucky post War.

The clasp-clip Crest Tuckaway was advertised at $15 in the June 1945 Popular Mechanics. It then became the $17.50 Crest Deluxe in the 8/19/46 LIFE ad (the ad only pictures the full size pen, but talks about a Crest "for him" and "for her") All Crest ads thereafter into the Forticel era are priced at $17.50. So a $15-marked Crest Tuckaway might be harder to find.

The brushed Sentinel Tuckaway is priced at $12.50 until the 5/17/48 Life ad which shows a polished cap Sentinel persian blue Forticel Tuckaway at $15. The Dec 1948 Popular Mechanics ad also shows a burnt umber "Tuckaway" with an open nib and Statesman-like cap band for $10 and the $15 GF Stratowriter Tuckaway

AND check out the nib selection on page 2 of the 5/19/47 LIFE ad showing the Crest Deluxe Tuckaway (the music nib appears to have a single slit):

Attached is another shot of Tuckaways - Carmine this time.

And the final tray which shows both that my collection is a little thin in some colors and that I'm running out of gas as I search through boxes to fill in more holes in the displays. 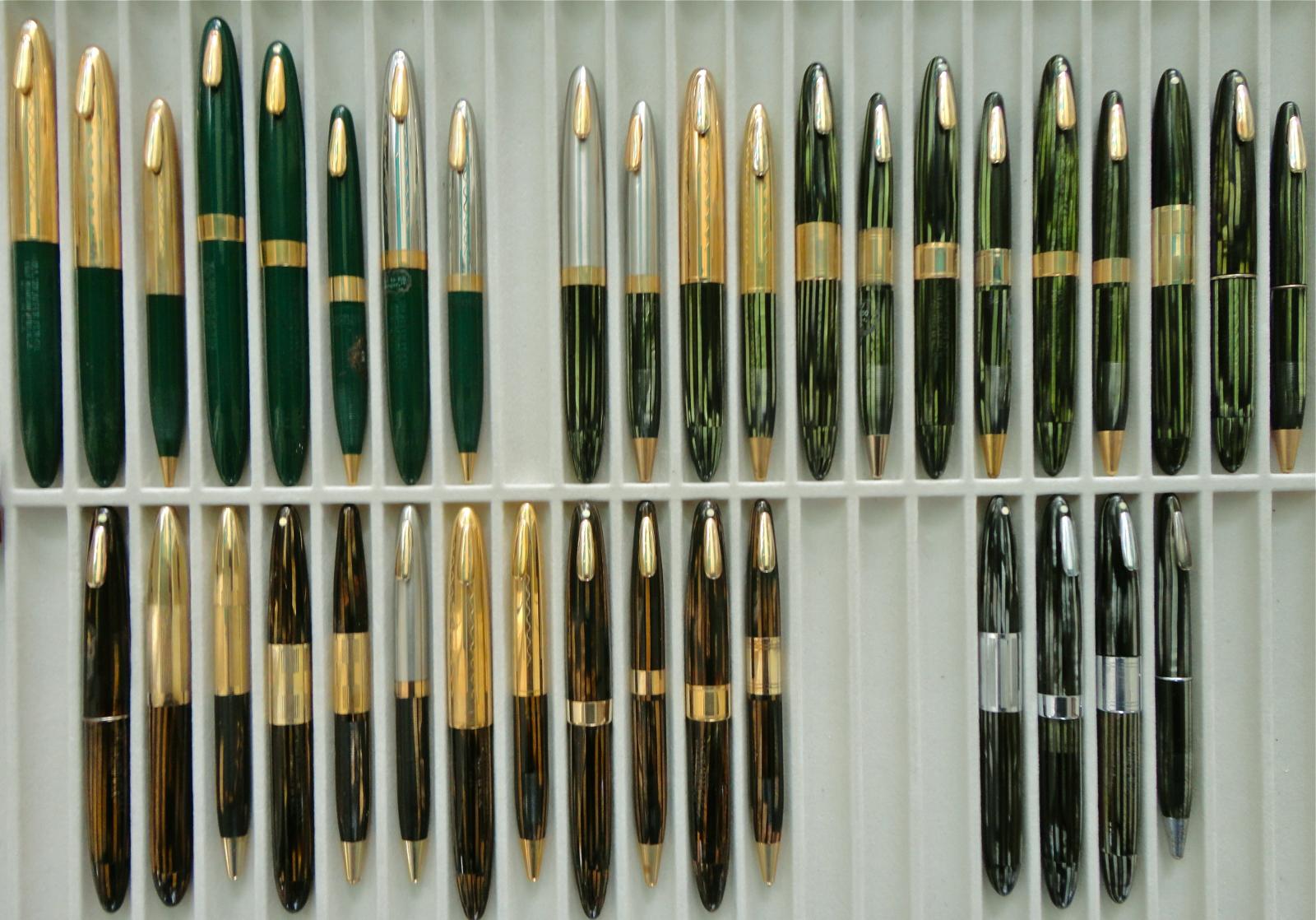 Is there a price code on your carmine stripe polished cap Sentinel? I have a similar pen with metal-rimmed white dot but no price code.

Also is there a price code on your green stripe Crest, or at least a white dot on the blind cap? What a great color combination!

Is there a price code on your carmine stripe polished cap Sentinel? I have a similar pen with metal-rimmed white dot but no price code.

Also is there a price code on your green stripe Crest, or at least a white dot on the blind cap? What a great color combination!

I do suspect that one is a mix. Not only does the polished cap correlate to the appearance of the injection-plastic plastic (no, I cannot say at the moment with certainty if the switch to polished cap happened same day, a bit earlier or a bit later than the switch to injection plastic), but the early polished steel sentinel caps of 1948 lacked the white dot, which arrived later (late 1948 or 1949). Finding a white-dot polished cap Sentinel with carmine plastic is... suspicious

Annnnnd..... I'll bet the green striped Crest is a bit off too. Even if white-dot on butt, bet you find a Sentinel price code on it.

My headache is not gone yet...

The price code on the carmine striped with the polished cap is 1000; the pen with the satin finished cap has 1250.

No price code and no white dot on the green striped Crest. I agree, it is a great color combo.

This set I picked up couple years ago, possibly from Dan Reppert. A final form Tucky, it is a Touchdown era Sentinel Tuckaway in Prussian Blue. In mint condition it has an interesting feature. It has the gold Gregg Shorthand symbol and actually has a "Shorthand" (might be Gregg Shorthand, but I didn't review entire label) sticker still on gripping section.

In fact, the employee magazine Sheaffer's Review during the early 1950's discusses the Gregg symbol. I must dig that up sometime.

A nice set, by any measure. $15 in 1949-50. Like many (all?) of the TD Tuckaways this one has no price stamp on barrel. I must review more pens to see when the price code when bye bye. 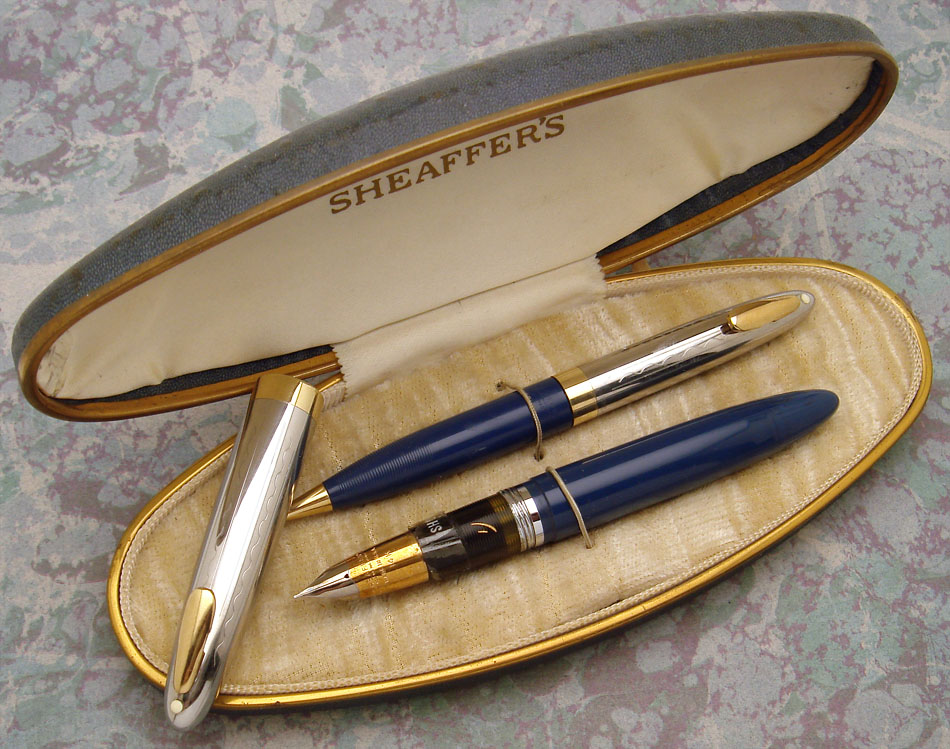 So the headache continues. Thought I saw Prussian, not Persian, when I looked at the '48 catalogue (one generation back from this oen), and though the 1948 and 1949 blues were similar. Now I will have to check both points

But, then, that is one reason I started this thread. Time to hammer out some of these details.

I have quite a bunch of the Gregg pens. At last two different flat-top Wahls, the black Sheaffers, maybe others currently escaping me. Have at least a Roseglow Balance and Snorkel with the Gregg crescent. Might be time for an eye-candy thread on that subject... but not tonight

1949-50 Touchdown era Sentinel Tuckaway in Green. Note the white dot and polished cap. Polished cap replaced the earlier brushed cap in 1948. Sheaffer started placing the white dot in its metal caps (instead of, usually, in butt of pen for metal-capped pens) either in late 1948 or 1949. The Touchdown filler is an easier restoration than the earlier plunger-fill arrangement. 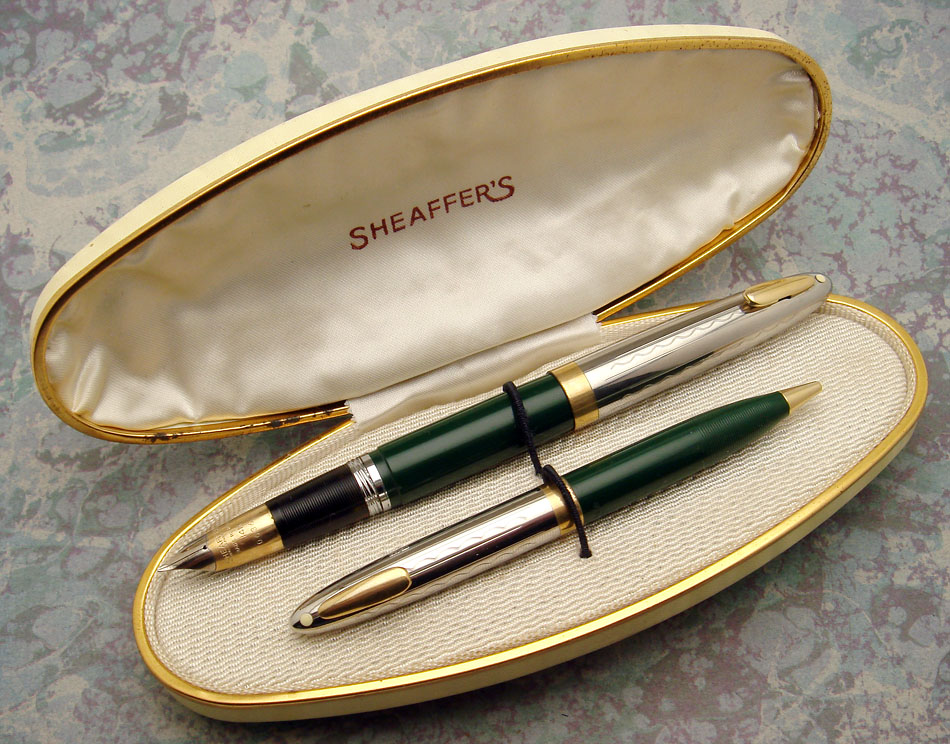 Lady II, the tuckaway version of the Sovereign. On the left, striped section/visulated barrel in 5 colors, on the right 2, examples with opaque barrel/internal tube filler. The brown one on the right has the white dot on the end of the cap. 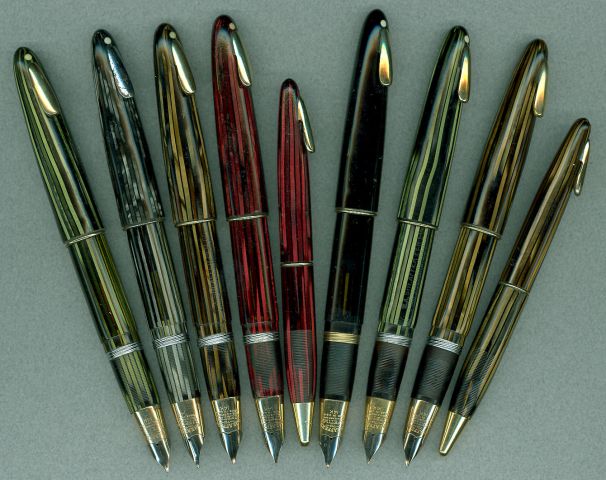 "Late" Lady II tuckaway with Statesman-width cap band, Lifetime nibs, no white dot. When stamped, these are still price-coded 875, same as the bead band Lady II and Sovereign. Similar full size "late" Sovereigns can be found. On the left, 3 colors with internally-painted transparent-stripe visulated barrel/section (similar black pens can be found), then a brown pen with transparent-stripe barrel completely internally painted black, and green and black pens with opaque barrel - note the thin black stripe on the green barrel is the same width as the cap stripe. Pencils, when found in sets, are same as Tuckaway II/Statesman. 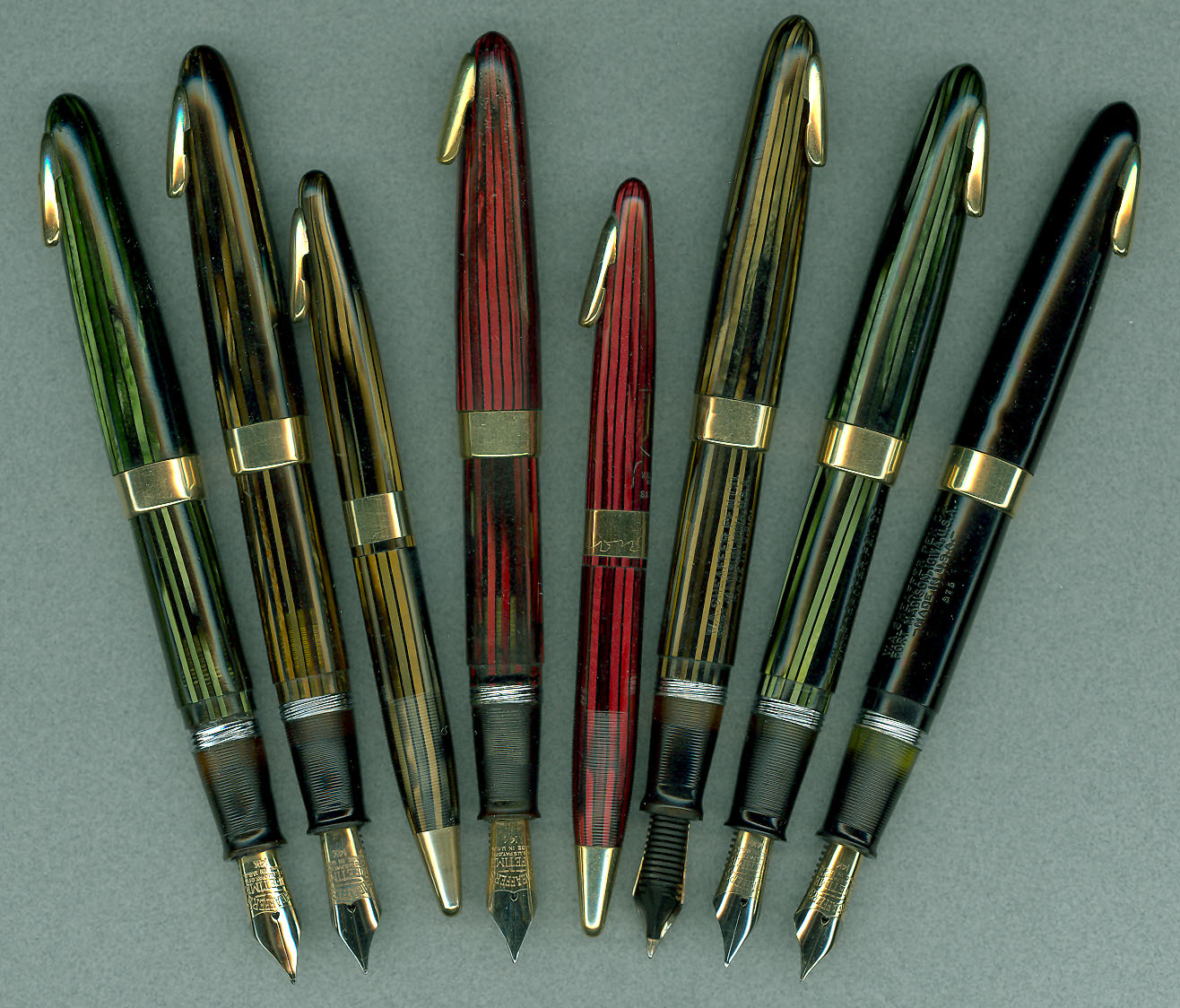 Thanks for displaying and explaining the Tuckaways as you have done. I find it helpful to see the various models in groups along with the explanation of the variation within the models.

Lady II, the tuckaway version of the Sovereign. On the left, striped section/visulated barrel in 5 colors, on the right 2, examples with opaque barrel/internal tube filler. The brown one on the right has the white dot on the end of the cap.

Back to SHEAFFER (USA "Big Five")